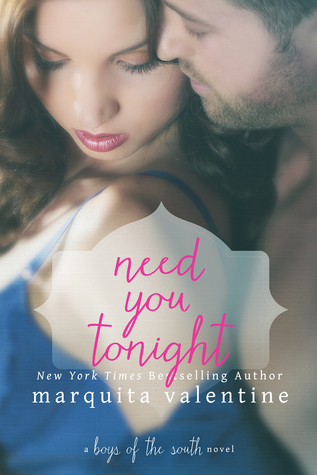 Need You Tonight by Marquita Valentine
Series: Boys of the South #6
Genres: Contemporary, New Adult, Romance
Publication date: October 20, 2014
Publisher: Self-Published
Format: eARC, 208 pages
How I got it: From the author
Add it: Goodreads
Buy it: Amazon | Barnes & Noble
My rating:

Everyone loves Parker Morgan, especially the high society ladies who pay thousands for his time. Becoming a male escort hadn’t been something Parker wanted to do, but when his family needed money to survive, he compromised everything he believed in to make ends meet. But there are two things he refuses to do—one, be paid for sex. Two, let himself fall for his beautiful new neighbor. She’s too pure and sweet for him. And that sadness in her eyes… he doesn’t want to know the cause of it. He has too many problems of his own.

A war widow at only twenty-two, Brooklyn Reeves has lived a shadowed existence for two years. Desperate to start over, she moves to Forrestville, never dreaming her new neighbor would be so sexy—not that she wants a relationship of any kind with him. Besides, he’s completely hostile and rude anytime they run into one another. Unfortunately, he’s also her handyman, and she’s forced to repeatedly call on him when one thing after another goes wrong with her rental house.

But as spring turns to summer, Brooklyn begins to sees a new side to Parker—one that makes her reconsider her opinion of him. Sparks fly, igniting a hunger that neither of them can resist.

But are either of them prepared for the consequences, once Parker’s dirty little secret comes to light?

Need You Tonight was a great little second chance story. It started off sad, with the death of Brooklyn’s husband and her trying to cope with the loss, but we don’t spend a lot of time mourning his death. I was glad to see that. If the book had stayed in the sad and depressing too long, it would have been a very different read. Instead, it was more hopeful, with a two-year time gap we didn’t live along with Brooklyn. When we are introduced to her again, it’s when she’s moved into Forrestville and meets Parker. She’s not entirely moved on from the loss, but she’s willing to make changes and try to live again. There are some sad moments throughout, but overall the book has a positive and hopeful vibe. I’m glad it was that, and not overly angsty.

I loved Parker and Brooklyn together. I mean, I loved them separately, but they were even better together. Their relationship did move a little fast for me, but when it’s right, it’s right. I definitely wouldn’t consider it instalove, more like giving in to attraction. They were both moving on from painful things in their pasts and I liked how they helped each other through, even if Brooklyn might not have known his history when they met. These two were sweet and sexy together. It wasn’t all sunshine and roses, but it was real and believable.

Need You Tonight was a quick and sexy read. Fans of the series will enjoy catching up with some of their favorite characters and couples from the previous books. I know I did. Marquita Valentine’s Boys of the South series has grown into one of my favorite in the genre. It’s sexy and sweet with likable, relatable characters in a small-town setting that reminds me a lot of home. I’m excited to see what’s next!