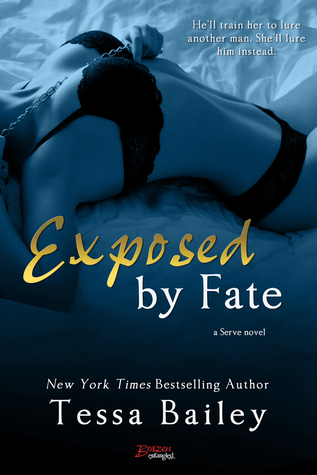 Publication date: October 27, 2014
Publisher: Entangled Brazen
Format: eARC, 226 pages
How I got it: From the publisher
Add it: Goodreads
Buy it: Amazon | Barnes & Noble
My rating:
Heat level:

He’ll train her to lure another man. She’ll lure him instead.

Oliver Preston isn’t one to turn down pleasure, but Eliza’s his sister’s best friend, and he’s torn between a sense of duty and his rock-hard need to find out if she tastes as delicious as he’s dreamed. Unable to handle thought of another man owning her body, he draws Eliza deep into his world of exquisite pain and pleasure. He has three lessons to instruct her. Three lessons to drive them both to the brink of ecstasy. And three lessons before he must give her to another man...if he doesn’t lose himself first.

Y’all, I think I have a new favorite Tessa Bailey book. Exposed by Fate takes readers back into the world of Serve from Owned by Fate, but this time it’s all about Caroline’s best friend, Eliza, and her brother, Oliver. And oh my god, did I love their story.

It seems like after each of Tessa’s books, there’s an object, location or food that I will *never* look at the same way again. (*cough* pool cues *cough*) This time it’s a boardroom table. Holy. Hell. Steam factor: 9/10. Exposed by Fate also has the sexiest shower scene I have ever read. Seriously, ever. Steam factor: 100/10. But these characters share more than just sexy time, and that’s why Tessa’s books are so appealing to me. They had a very real chemistry and I thoroughly enjoyed reading along as they dropped their walls and submitted to each other. Neither may have been looking for a relationship when they began this arrangement, but what they found was real and powerful. And that, more than just the sexy time, is what made me love this book as much as I did.

I’ve seen teasers of the next book in the Serve series and I just can’t wait until it’s available. I can’t wait to get back to the world of Serve and Tessa’s smokin’ hot men.