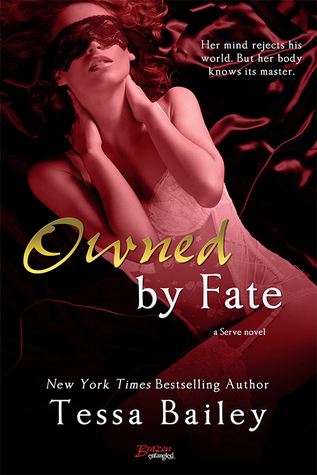 Her mind rejects his world. But her body knows its master.

Jonah Briggs doesn’t leave his post for just anyone. As the owner of the club, his sole purpose is to ensure that his clientele get everything they need, but when he sees Caroline, his only thought is what he wants—to dominate the sexy little reporter and give the most exquisite pleasure she’s ever experienced.

Caroline has no intention of entering that particular lion’s den—not with her family’s reputation at stake—no matter how dark, sexy, and complex the lion in question may be. But with every encounter, she craves more, and with every slide of his lips, she realizes Jonah might just be the man to break down all her defenses…if she’ll let him.

I don’t think it’s any secret that I love Tessa Bailey’s books. She’s my go-to whenever I’m in the mood for a quick, sexy and naughty read. After finishing an angsty and emotional read, I was definitely in the mood for something a little dirtier, so I picked up my copy of Owned by Fate and absolutely devoured it in the matter of a couple hours. Perfect timing, too, because Exposed by Fate comes out in a couple days… but I already have a copy for review. *cough*

Owned by Fate was the story of buttoned-up journalist Caroline and BDSM club-owner Jonah. Caroline visits Jonah’s club, Serve, on an assignment. She’s determined to hate everything about the club. Instead, after meeting Jonah and trying hard to fight the instant pull between them, she finds herself upstairs observing some of the more explicit goings-on and realizes it’s not nearly as deplorable or offensive as she thought it would be based on her research. Something about Jonah – and the thought of him doing those things to her – makes her want to learn more about this world… and experience it for herself. What ensues between them is HOT… HOT… HAWT.

Jonah just might be Tessa’s dirtiest talker yet and I LOVED it. Not only was he a total dominant alpha, but there was a little something more to him. He was concerned with Caroline’s pleasure and enjoyment with their arrangement. He felt more for her than he wanted to, but was willing to give it up if it made her happy. He was very focused on the needs of those people he cared about and I really liked that about him. The situation with his daughter and his fight to get to see her humanized him even more and made it impossible not to love this guy.

Owned by Fate was a fantastic start to Tessa’s new hot and sexy Serve series. I was already looking forward to reading Exposed by Fate because, hello! new Tessa book! but now that I’ve got the background on Eliza and Oliver, I am EVEN MORE excited than I thought possible. As a matter of fact, I think I’ll dive in right now…

2 responses to “In Review: Owned by Fate (Serve #1) by Tessa Bailey”