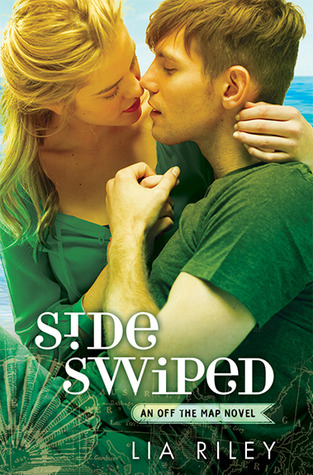 It was only meant to last the summer...

Talia Stolfi has seen more than her share of loss in her twenty-one years. But then fate brought her Bran Lockhart, and her dark world was suddenly and spectacularly illuminated. So if being with Bran means leaving her colorless NorCal life for rugged and wild Australia, then that’s what she’ll do. But as much as Talia longs to give herself over completely to a new beginning, the fears of her past are still lurking in the shadows.

Bran Lockhart knows that living without the beautiful girl who stole his heart will be torment, so he’ll take whatever time with her he can. But even though she has packed up her life in California and is back in his arms for the time being, she can’t stay forever. And the remaining time they have together is ticking by way too fast. Though fate seems determined to tear them apart, they won’t give up without a fight—because while time may have limits, their love is infinite...

I absolutely loved Lia Riley’s debut, Upside Down. I fell in love nearly instantly with Talia and Bran. I loved watching their relationship grow and I enjoyed the dynamic between them. It was obvious they wanted to be together and would go to great lengths to make it. I was torn when learning each book in the Off the Map series would follow their relationship. On one hand I was excited to get a lot of Talia and Bran, but on the other hand I wondered what kind of tests their relationship would undergo in three books.

Things start off really well in Sideswiped. Talia and Bran are about to be reunited for four months as Talia finishes her coursework. It sucks that their time together has an expiration date, but I hoped they would make the most out of it. Unfortunately, it seemed like what they did instead of enjoying the time they had together, was worry incessantly about what would happen when that time was up. I mean, I get it. I’ve been in a long distance relationship and it’s not easy. I know Bran has been hurt in the past, so he has an aversion to long distance relationships. Things were quite tough on my beloved couple during this book, but it was mostly of their own doing, which was difficult for me to take. Talia was whiny and Bran was unrealistic… and a bit of a jerk at times. I would never call their relationship in Upside Down uncomplicated, but it was a cakewalk compared to this book. I missed the light-hearted flirtation and sexiness they had together in the first book. It was obvious they still cared for each other, but they each made things a lot more difficult than they needed to, in my opinion. Their relationship was important, but it wasn’t the only thing either of them had going on in their life. There were lots of important decisions to be made and their lack of communication (and Bran’s selfishness) wasn’t helping.

You might look at the three stars I gave this book and thing it means I didn’t like it. That’s not the case. In all honesty, it’s more a 3.5 star read, but I don’t do half stars. Sideswiped was a quick read and I was completely sucked in. The Talia and Bran I know and love finally made an appearance in the second half of the book and I rejoiced. It was difficult to like the people they were in the first half of the book. I know their attitudes were a product of the situation they were in, but I wanted to shake them and tell them to enjoy the time they had together, be mature and figure out how to build a future together. I have a vested interest in this couple and it pained me to watch them struggle. But one thing is for sure, I felt all the feels. They weren’t all good, but they were all there.

I’m anxious to see what happens with Talia and Bran in the third and final book, Inside Out. While my beloved characters frustrated me in this book, I was still with them every step of the way. Things ended on a far more hopeful note than I feared they would, so I hope for the best in Inside Out. I was afraid Sideswiped would leave me gutted and emotionless, lying on the floor in a pool of my own tears – and while it was close, it didn’t leave me quite like that. The tease for Inside Out, on the other hand? Holy. Crap.

Tags: In Review, Lia Riley, Off the Map, Sideswiped