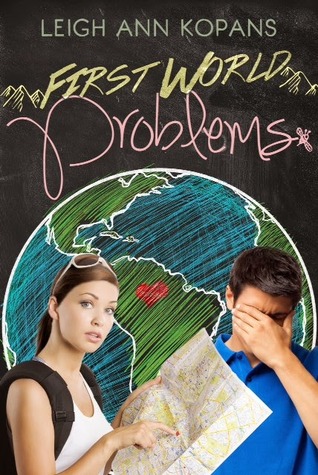 Publication date: September 2, 2014
Publisher: Self-Published
Format: eARC, 300 pages
How I got it: From the author
Add it: Goodreads
Buy it: Amazon | Barnes & Noble
My rating:

Sofia Cole has always been able to get anything she wants through begging, flirting, and shameless manipulation of everyone around her.

Sofia doesn't think that Dad sending her on a gap service year to Guyana to address how "spoiled" she is will change any of that.

Leigh Ann Kopans hit my radar with Solving for Ex. It was such a great YA contemporary. I loved the characters (except the ones you aren’t supposed to love) and all the little nerdy bits in it made my geek heart happy. When I learned she was writing “mean girl” Sofia’s book as a companion novel, I jumped at the chance to read it. Oh my word. I loved this book so hard. I didn’t think I would wind up a Sofia fan, but I was so very wrong.

After spoiled Sofia blows more money on a birthday party than I can comprehend spending my life, her father finally puts his foot firmly down and tells her she’s not spending her gap year in Europe like she planned. Instead, her mother-in-law has signed her up for a year-long service trip to Guyana. For a pampered princess like Sofia, this is pretty much the end of the world. She decides she’ll only do it as long as she needs to and then she’ll convince her dad to bring her home early. After dealing with bugs and snakes, monkey poo, back-breaking work and living with no indoor plumbing or electricity, it all seems worse than she could have even imagined. After her dad refuses to bring her home after her first attempt to sway him, she decides to play along, thinking that maybe glowing reports home from the project manager Callum will help her cause. Little does she know, the time spent working with Callum will lead her to a new passion, a new romance and a new-and-improved overall attitude.

As you can probably imagine, Sofia wasn’t the most likable character at the beginning of this book. She was spoiled, prissy and self-centered. She was good at manipulating people to get her way. These are all the things Callum sees in her when she first arrives in Guyana. Callum couldn’t be any different from Sofia if he tried. He was a giver. He cared about others and frequently put their needs in front of his. He was such a sweet and swoony guy, even in the beginning when he was fairly intolerant of Sofia’s antics. My love for him only grew as the book went on. He wasn’t perfect. He had a temper and could be pretty judgmental, but it was obvious he had a reason for it. Once his past came out, it was abundantly clear.

I loved Sofia and Callum together from the start. I liked how Callum insisted on helping Sofia even though it was obvious she drove him about half nuts. He spent a large part of the book fighting his feelings for her, thinking she was no different than the last spoiled brat to show up at his camp. But they had all these great little funny (and sometimes sweet) moments together and the feelings between them developed so naturally that it felt completely believable to me. It was never forced. I loved their banter. They were easy to root for, even with all the ups and downs.

As wonderful as the story was, the characters were even better. Sofia, Callum, Lena and Arielle are all brilliant in their own way. Each of them brought something very special to the book and I can’t imagine it without them. They made quite a great little team there in Guyana. I wouldn’t be opposed to a little more of Lena and Arielle’s story (hint, hint).

Sofia’s transformation during the course of this story was beyond incredible. The spoiled brat who was afraid to get her hands dirty at the beginning of the book became a strong and independent woman by the end. She took a look at the lives around her and found a way to make an impact. By finding something important to her AND the others, she truly made a giant difference in the lives of those she worked with. The fact that she did it in such an old Sofia kind of way made it even more realistic. She didn’t completely forget who she was. She just found a better version of herself along the way.

I’ve done my share of service projects and volunteer efforts, but I can’t even begin to comprehend what it takes to go on a year-long journey like Sofia did in this book. I’m not a spoiled brat, but I definitely have my prissy moments, so the thought of living without indoor plumbing and electricity in an area filled with snakes and mosquitos isn’t high on my list of things I ever want to do. It definitely takes a special type of person to do this, as Sofia found out. It would definitely put life in perspective. All that said, there was something about this book that made me want to do more and give back. I’m not hopping on a plane to Guyana anytime soon, but Leigh Ann definitely got me thinking about other ways I can give back.

There are so many great things about this book that I could keep talking about all of them for hours. I can’t think of a thing I would change about First World Problems. From the characters to the setting to the humor and the romance, this book had it all. Once I picked it up, I literally couldn’t walk away from it. The world-building was so vivid that I felt like I was right there with Sofia the entire time. I just can’t say enough about how great this book is. I can’t wait to see what Leigh Ann gives us next. In the meantime, I think I’ll go check out her backlist…

Raised on comic books and classic novels, Leigh Ann developed an early love of science fiction and literature. As an adult, she rediscovered her love for not only reading, but also writing the types of fiction that enchanted her as a teen. Her debut novel, ONE, is about a girl with only half a superpower, the boy who makes her fly, and her struggle to make herself whole.

Leigh Ann, her husband, and four children live in Columbus, Ohio. When she’s not immersed in the world of fiction, you can find her obsessing over the latest superhero movie or using her kids as an excuse to go out for ice cream (again.)