Sam McKenna’s never turned down a dare. And she's not going to start with the last one her brother gave her before he died.

So Sam joins the first-ever class of girls at the prestigious Denmark Military Academy. She’s expecting push-ups and long runs, rope climbing and mud-crawling. As a military brat, she can handle an obstacle course just as well as the boys. She's even expecting the hostility she gets from some of the cadets who don’t think girls belong there. What’s she’s not expecting is her fiery attraction to her drill sergeant. But dating is strictly forbidden and Sam won't risk her future, or the dare, on something so petty...no matter how much she wants him.

As Sam struggles to prove herself, she discovers that some of the boys don’t just want her gone—they will stop at nothing to drive her out. When their petty threats turn to brutal hazing, bleeding into every corner of her life, she realizes they are not acting alone. A decades-old secret society is alive and active… and determined to force her out.

Now time's running short. Sam must decide who she can trust...and choosing the wrong person could have deadly consequences.

Let’s hear it for strong, kickass female lead characters in a realistic young adult novel! YA has some great female characters, but I’ve never run across one quite like Sam McKenna before… at least in realistic fiction. I loved this girl. She was strong and determined – to a fault, some might argue – but still realistic and likable. She went through so much crap throughout the course of this book, but she her determination didn’t waver. That might have started because of her older brother’s dare, but I have no doubt that, by the end, it had more to do with her attitude and unwillingness to be pushed around than the dare. She had something to prove and no one was going to stop her… no matter how hard they tried.

Being perfectly honest, this book was a little slow to start. I’d heard so many great things about it that I never once thought about setting it down, but it still took me some time to get fully invested in the story. There was a lot of military jargon and tradition in the beginning, but I don’t see that as a bad thing. I considered it world building. I feel like I learned something. Several somethings even. I felt like I was right there with Mac as she went through the trials and tribulations of being at DMA. When the story took off, however, it went hard and didn’t stop until the end. I didn’t expect edge-of-my-seat suspense and action from this book, but that’s precisely what I got.

There was a lot to love about Rites of Passage. The characters are high on the list. I’ve already said how much I loved Mac. My second favorite was Drill. Oh my god. Can Drill have a book of his own, please? Sigh. I loved him so much. For awhile there, it seemed like there might be a bit of a love triangle in this book, but I was thrilled to see there really wasn’t. I loved how Drill watched out for and protected Mac without being too alpha male and without stifling her. The thing between them was, of course, completely forbidden. Military rank and all that. I want to say it’s the fact that it’s forbidden that made it so damn sweet, but the truth is, they were just so perfect for each other. They were connected in ways Mac didn’t even realize at first.

This book was chock full of interesting characters. Some in good ways and some in bad. It seemed as though everyone was keeping secrets and they weren’t always what I thought they might be. I didn’t really ever feel like I could predict what was going to happen next or how everything would work out in the end and I LOVED THAT. I read so many books and a good portion of them are utterly predictable. Rites of Passage was far from that. In addition to the action and suspense, there were just the right amount of twists and turns.

My only complaint about the book – and it’s a tiny one – is the ending. If this was the first book in a series, it would be perfection. As a standalone, it feels a wee-bit unfinished. That might just be because I had connected with these characters on a deep level and I’m greedy and wanted more. (Of course, I also have my fingers crossed the author will decide to write a sequel. Perhaps of the new adult variety. But I’ll take anything, seriously.)

If you love strong female characters, great action and suspense, and sweet forbidden romance, look no further. Rites of Passage is a great debut novel and I’m looking forward from much, much more from Joy N. Hensley in the future! 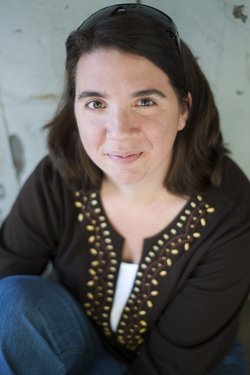 Joy N. Hensley is a former middle and high school teacher. She used to spend her twenty-minute lunch breaks hosting author Skype chats for her students, or planning ways to play in the mud with them. There's nothing that she's not willing to try--including hiking 600 miles of the Appalachian trail. Once upon a time she went to a military school on a dare. She lives in Virginia with her husband and two children, finding as many ways as she can to never do another push-up again. She is represented by Mandy Hubbard at D4EO Literary Agency.

One response to “In Review: Rites of Passage by Joy N. Hensley”