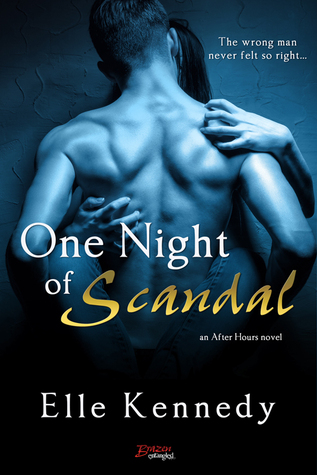 One Night of Scandal by Elle Kennedy
Series: After Hours #2
Genres: Adult, Contemporary, Romance
Publication date: September 8, 2014
Publisher: Entangled Brazen
Format: eARC, 230 pages
How I got it: From the publisher
Add it: Goodreads
Buy it: Amazon | Barnes & Noble
My rating:

Ex-fighter Reed Miller has been secretly lusting over his best friend’s girl for months, but he refuses to jeopardize a friendship over a woman—especially one who doesn’t like him all that much. Now that Darcy’s on the market again, it’s even more imperative to stick to his strict hands-off policy. But the sizzling attraction between them is too powerful to ignore, and once he’s had a taste of her…all bets are off.

Darcy Grant is tired of walking the straight and narrow path. She’s on the hunt for passion, and there’s no denying Reed is just the man to give it to her. Although she has no interest in dating a bad boy, and certainly not her ex’s best friend, it’s impossible not to melt beneath Reed’s skillful touch. Now it’s just a matter of setting a few ground rules—and hoping her rule-breaking, sweet-talking bad boy agrees to follow them. But if she lets Reed into her bed, does she stand a chance of keeping him out of her heart?

One Night of Scandal was a fun, sweet and sexy read. It’s my first Elle Kenndy novel, but it definitely won’t be my last. I thoroughly enjoyed the way she wrote her characters. Their story was engaging and there were plenty of sweet and sexy moments.

In this book, we get the story of Reed and Darcy. Their history is rather complicated, as Darcy was Reed’s best friend AJ’s girlfriend until very recently. (There’s no cheating in this book for those of you who avoid cheating books like the plague.) When the book starts, Darcy and AJ have split. They’re still good friends and they care for reach other, but they don’t have the spark needed for a good relationship.

Reed and Darcy, on the other hand, have fantastic chemistry. They’ve been attracted to each other for a long time, but wouldn’t ever do anything about it because it would hurt AJ. Now that things have changed, it’s a great time for them to explore the connection between them. It’s nothing serious. Just a fling. (Right. Those always work out well and it never gets complicated by feelings.) Reed isn’t relationship material. He’s a bad boy screw up. Or is he?

Reed brought a whole boatload of issues into the fling with Darcy, but I kinda loved him. Underneath his bad boy, love ’em and leave ’em exterior, he was pretty insecure. He was also sexy as sin and a pretty damn good guy all around. I liked Darcy. She was real and believable and I could understand why she would be on the lookout for real passion after what really seemed like more of a close friendship with a few benefits with AJ. She definitely found real passion with Reed. They were smoking hot together.

There was one scene in the book that was so sweet it might border on cheesy for some people, but I didn’t care. I’m a romantic at heart, and it was my favorite part of the book. It’s definitely the one that will continue to stand out to me for a long time to come. So freaking cute. And a perfect next step in what was to come for these characters.

3 responses to “In Review: One Night of Scandal (After Hours #2) by Elle Kennedy”