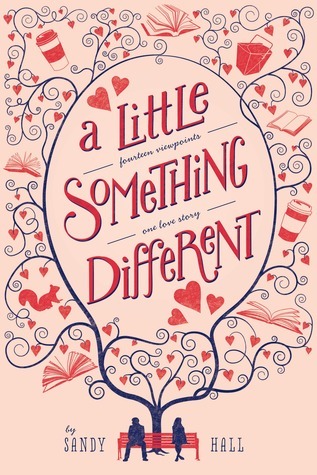 A Little Something Different by Sandy Hall
Genres: Young Adult, Contemporary, Romance
Publication date: August 26, 2014
Publisher: Swoon Reads
Format: ARC, 272 pages
How I got it: From the publisher
Add it: Goodreads
Buy it: Amazon | Barnes & Noble | iTunes
My rating:

The creative writing teacher, the delivery guy, the local Starbucks baristas, his best friend, her roommate, and the squirrel in the park all have one thing in common—they believe that Gabe and Lea should get together. Lea and Gabe are in the same creative writing class. They get the same pop culture references, order the same Chinese food, and hang out in the same places. Unfortunately, Lea is reserved, Gabe has issues, and despite their initial mutual crush, it looks like they are never going to work things out. But somehow even when nothing is going on, something is happening between them, and everyone can see it. Their creative writing teacher pushes them together. The baristas at Starbucks watch their relationship like a TV show. Their bus driver tells his wife about them. The waitress at the diner automatically seats them together. Even the squirrel who lives on the college green believes in their relationship.

Surely Gabe and Lea will figure out that they are meant to be together....

A Little Something Different is destined to go down in history as the most unique and charming book I read in 2014. I knew from the minute I saw this delightful cover that I *had to* read this book. I suspected I would love it. I was absolutely right. With 14 different POVs (and not one of them who you would consider to be the “main characters”), A Little Something Different is exactly what it promised – something different from everything else I’ve ever read.

Six months ago, if you would’ve told me I would read (and LOVE) a book that contained both bench and squirrel! point of views, I would’ve been likely to look at you like you were completely out of your mind. I would’ve also been completely wrong. It’s difficult to point out which POV I appreciated most, but the squirrel! is definitely at the top of the list. I loved reading about the goings-on between Gabe and Lea through the eyes of each of these other characters. From the annoyed cynical classmate, to the park bench that insists all butts aren’t created equal, to the creative writing professor who makes it her mission to get them together, each of the 14 narrators brings something special to this story.

A Little Something Different is a light, quick read. It’s perfect for those of us who love to observe others and make up stories about them. (Yes, I confess. I’m a people-watcher. I’m a people’s-stories-maker-up.) I read the majority of this book with a giant, goofy grin on my face. I pretty much challenge anyone to try to read it without said goofy grin. And giggles. Lots of giggles. Particularly at the squirrel!

Aside from being a great all-around book, A Little Something Different had a great message about the difference between how you see yourself and how others see you. We’re often our own worst critics and don’t see ourselves as clearly as others do. We’re also not always quick to pick up on the vibe between ourselves and other people. This book shows that by showing us the main characters and their developing relationship (even if they didn’t know that’s what was happening at the time) through their own eyes. Even though there wasn’t one single chapter written from either Gabe or Lea’s POV, I still feel like I know them really, really well. And it was so easy to root for them. They were adorable together.

Some of my favorite quotes:

“I’ve got a theory,” I say.
“That it’s a demon,” Lea says, so quietly I almost miss it, and I probably would have, but she slaps a surprised hand in front of her mouth. I see Gabe turn to her and smile.

“A dancing demon?” he says quietly.
And then in my finest Rupert Giles impression of all time I say, “No, something isn’t right there.”

“I don’t want you waxing poetic about love between a stoner and some random chick in my face.”
“I totally ship them,” Tabby says, leaning her hand in her chin and staring at the door, like she’s willing them to come in together.

If you’re looking for a light-hearted novel about love, I can’t recommend this one highly enough. Sandy Hall is definitely on my radar now. I loved her writing style and the originality of this story. I can’t wait to read more from her.

Sandy Hall is a teen librarian from New Jersey where she was born and raised. She has a BA in Communication and a Master of Library and Information Science from Rutgers University. When she isn't writing, or teen librarian-ing, she enjoys reading, marathoning TV shows, and long scrolls through Tumblr

11 responses to “In Review: A Little Something Different by Sandy Hall”