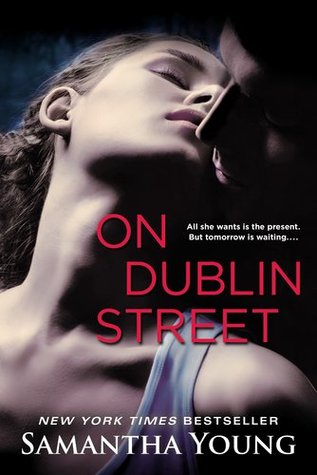 Jocelyn Butler has been hiding from her past for years. But all her secrets are about to be laid bare…

Four years ago, Jocelyn left her tragic past behind in the States and started over in Scotland, burying her grief, ignoring her demons, and forging ahead without attachments. Her solitary life is working well—until she moves into a new apartment on Dublin Street where she meets a man who shakes her carefully guarded world to its core.

Braden Carmichael is used to getting what he wants, and he’s determined to get Jocelyn into his bed. Knowing how skittish she is about entering a relationship, Braden proposes an arrangement that will satisfy their intense attraction without any strings attached.

But after an intrigued Jocelyn accepts, she realizes that Braden won’t be satisfied with just mind-blowing passion. The stubborn Scotsman is intent on truly knowing her… down to the very soul.

On Dublin Street is one of those books that has been on my radar forever, but I’d just never found the right time to read it. That all changed a couple months ago when I won an audiobook of choice in a contest and decided to get a copy of On Dublin Street. While I’ll admit I had a total love/hate relationship with this book, in the end, I wound up pretty much head over heels for it.

I don’t really know what I can say about this book that hasn’t been said a million times before, so I’m going to focus on my feelings and not the story. My heart broke for Joss. It really did. Losing so many people she loved at such a young age left a huge mark on her life and definitely shaped her future. She leaves that old life behind and moves to Scotland, her mother’s homeland, after she graduates school. She keeps everyone at a distance because she’s convinced SHE is the reason people get hurt. She cares about them and they get hurt or die. It’s not logical, but you can understand why she thinks that way.

When she meets Braden, he’s just a sexy jerk who stole her cab. She soon finds out he’s also her new roommate’s brother. There’s an instant chemistry between them and, after playing cat and mouse for far too long, they decide to give into their urges and explore a friends with benefits situation with each other. Hey, we all know how this will go right? It will start with hot sex and good intentions and end with someone getting hurt. But it’s a chance they’re willing to take.

So why the love/hate relationship, you might ask? Joss drove me insane. Yes, I understood why she was as she was, but after all they’d been through, I wanted her to trust Braden more. I wanted her to admit to what they had. And Braden? I thought he was an amazing guy, but then there would be these moments where I thought his past urges had resurfaced and it just about broke my heart… for me and for Joss. I hate when characters don’t behave as I want them to, but the unpredictability of what would happen next made it more interesting. Even if it about drove me half mad in the process. In the end, I think I have to admit the real reason they drove me so insane was because I was in love with both of them and wanted them to find happiness together.

All in all, this was a great read. I was emotionally-invested in the characters and the story. It was sexy, sweet and, at times, rather emotional. It was a beautiful story about love, life, second chances and friendship. I loved the side characters nearly as much as I did Joss and Braden. Braden’s sister Ellie was a great character in her own right and I loved how she broke down Joss’s walls to become a real friend when she needed it most.

I plan to binge-read the rest of this series ASAP (and have already started, as a matter of fact). I could kick myself for not giving into the urge to read it sooner. Oh, and just a quick note because I did read this one in audiobook format: the narrator was fantastic. She did a great job with the accent and the pacing was near perfect. She definitely added to my enjoyment of the book overall.