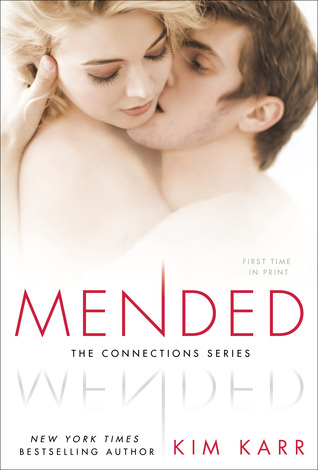 Always in control, Xander Wilde considered life on the road to be a perfect fit for him. But when disaster strikes on the Wilde Ones’ latest tour, fate intervenes…and a newly single Ivy Taylor, the only girl he has ever loved, steps back into his life.

After moving past her painful breakup with Xander years ago, Ivy was poised to become the next big name in pop music…when suddenly she withdrew from the limelight—the same day she announced her engagement to her controlling agent, Damon Wolf.

Xander knows he should keep his distance. But once they’re on the road, he can’t resist pursuing her for a second chance. Yet a jealous Damon can’t let her go—and he’s keeping dangerous secrets that could destroy them all.

When the three of them come together, everything falls apart. But if Xander and Ivy can hold tight to the bond that connects them, they just might have a chance at reclaiming the powerful love they thought they had lost forever...

I think it’s safe to say I’m officially hooked on Kim Karr’s Connections series. I’m kinda kicking myself for waiting this long to begin reading it and I’m not feeling at all guilty for tossing everything else to the side to binge read this series. While each book tells a story unique to those characters, they’re all real and passionate, sexy and romantic. I love how interconnected the characters are and that with each new novel we get a glimpse into the couples whose stories have gone before.

Mended is the story of Xander and Ivy. I flipping loved them together. I love a second chance story and this was one at its best. Xander and Ivy were high school sweethearts. They parted ways after a misunderstanding and each went on to live their own lives and build their own music careers. Now fate has thrown them back together on tour and things get rather interesting!

Xander is probably my favorite guy in this series to date. While I’m not often bothered by characters who embody a stereotype, I’m even more pleased when they don’t. Xander is one of those who stands out. He’s a rock star who isn’t a manwhore bad boy! He never did truly get over Ivy and he feels some guilt over how things ended between them. He was super sexy and swoony. Ivy was a fantastic female lead. She was strong and successful! She made some dumb decisions every now and then, but even the smartest female does. She didn’t rely on a man and that made me happy. Even though he’d hurt her, she had never really gotten over Xander either… and who can blame her?

These two were so good together. I loved the banter between them. The sexual tension snapped and crackled nearly from the moment they set eyes on each other again. When the finally gave in to each other, the sexy times were hot. But it was also apparent they shared more than simply sexual attraction. They had very real feelings for each other and I cheered them on as they had a chance to work through their pasts and try again.

So, Mended wasn’t all roses and rainbows. There were some moments that made me want to throw my iPad against the wall. You’ll know those moments when you get there. Thankfully those issues are resolved pretty quickly.

Xander and Ivy’s story made a great addition to the Connections series. I’m excited to continue reading more of this series now that I’m nearly caught up. Kim Karr’s gained a fan in me.