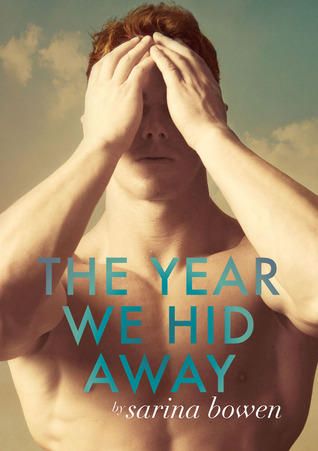 The Year We Hid Away by Sarina Bowen
Series: The Ivy Years #2
Genres: Contemporary, New Adult, Romance
Publication date: June 1, 2014
Publisher: Self-Published
Format: eBook, 233 pages
How I got it: I bought it!
Add it: Goodreads
Buy it: Amazon | Barnes & Noble
My rating:

Scarlet Crowley’s life was torn apart the day father was arrested for unspeakable crimes. Now the shock has worn off, but not the horror.

It’s a safe bet that Scarlet is the only first year at Harkness College who had to sneak past TV news trucks parked on her front lawn just to leave town. But college will be Scarlet’s fresh start. Clutching a shiny new student ID — with a newly minted name on it — she leaves it all behind. Even if it means lying to the boy she’s falling for.

Bridger McCaulley is a varsity hockey star known for being a player both on and off the ice. But a sobering family crisis takes that all away. Protecting his sister means a precarious living arrangement and constant deception. The only bright spot in his week is the few stolen hours he spends with Scarlet.

The two form a tentative relationship based on the understanding that some things must always be held back. But when grim developments threaten them both, going it alone just won’t work anymore. And if they can’t learn to trust one another now, the families who let them down will take everything they’ve struggled to keep.

Sarina Bowen hit my radar pretty recently. I saw a couple trusted blogs raving over The Year We Fell Down and decided it sounded like it would be right up my alley. And you know what? It was. I loved it. I was so excited to learn it would be part of a series and I began eagerly anticipating the release of the upcoming books.

The Year We Hid Away was wonderful. It tackled two difficult issues but did it with so much heart that I thought my own was going to burst in the process. Scarlet and Bridger were both brilliant and complex characters. They both had baggage and had been dealing with things no one should have to, let alone people their age, but rather than buckling under the pressure, they rose to the challenge and forged ahead. They were both hiding parts of their past, and in Bridger’s case, present day situation, but the reader knew the story nearly from the beginning since this book was told in dual POV. The relationship between them developed slowly and naturally over time. It was real and heartwarming to watch them find a source of strength in each other.

Scarlet’s family situation is icky. It’s pretty much ripped straight from the headlines of the Jerry Sandusky story out of Penn State. It made me nearly as uncomfortable in this book as it did in real life. It was real and realistic, horrifically so. I can’t imagine the heartbreak that must come with the realization someone you trust is capable of committing such awful acts. It definitely had a huge impact on her life. Bridger’s family situation was just sad. It about broke my heart. He stepped up on such a huge level. That alone made me fall in love with him.

There’s not one single thing I could change about this book. It had some devastating moments, but the overall tone was hopeful. I felt the feels and cried the tears. I loved the sweet times and the sexy ones. Even the side characters added something special to this book. It’s one I won’t forget for a very long time.

Tags: Sarina Bowen, The Ivy Years, The Year We Hid Away