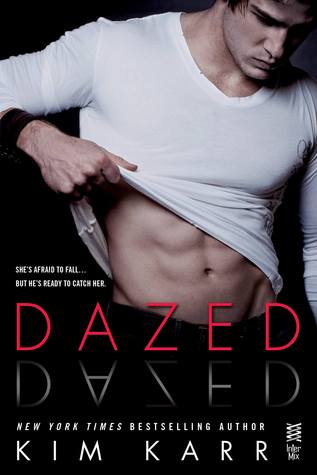 Jagger Kennedy never went looking for fame, he just fell into it. After scoring a major modeling contract, his clean-cut good looks and charm catapulted his career. But when his actress girlfriend breaks his heart, he moves to L.A. to try his hand at acting. He needs to make a change, and the last thing he’s looking for is love…

Aerie Daniels is a woman in control … until she meets Jagger. Her surprising connection with him leaves her stunned, and it’s unlike anything she’s ever felt. But just when she lets her walls fall, she makes a startling discovery about him that breaks her fragile heart into a million pieces.

To keep from losing the one woman he can’t bear to be without, Jagger is willing to give up anything—including his career. But even that might not be enough to regain Aerie’s shattered trust…

Remember when I reviewed Torn and said this series keeps getting better? Dazed totally continues the trend. It may be a novella, but it’s big on story, sexy times and character development. I want to be friends with Aerie… and Jagger? Totally on my book boyfriend list.

Dazed is the first of the Connections novels that doesn’t follow Dahlia and River, and as much as I loved their story, I was ready to learn more about some of the side characters that intrigued me in the first two books. First up is Dahlia’s best friend, Aerie and River’s cousin, Jagger. These two could not be any more different… or perfect for each other. Aerie is a strong woman who is committed to her job. She’s not looking for love. When she meets model turned actor Jagger she’s attracted to him, but convinced he’s a jerk. When they meet again, officially this time, at a dinner party with Dahlia and River, she learns there’s much more to him than meets the eye. And she wants to know more. Sorry, River. You were great. But Jagger? I’ll take him any day of the week. He’s sexy as hell, sweet, thoughtful and quite determined when he sets his mind on something… or someone. Aerie has definitely caught his eye.

Aerie and Jagger were *wonderful* together. I loved reading as they got to know each other and as their feelings grew. I loved the Alice in Wonderland references peppered throughout the book, too. It showed Jagger’s playful side. The startling discovery teased in the blurb for this book? Not that startling to me. Honestly, I found it all a little overly dramatic. It definitely made Aerie look paranoid, in my opinion. But it was such a small blip, it didn’t change my opinion of the book – or the characters – one little bit.

I really enjoyed this story. In fact, I would’ve loved it had their story been more than just a novella. I could definitely do with another dose of Aerie and Jagger. Here’s hoping they pop up again in the other novels in this series.

One response to “In Review: Dazed (Connections #2.5) by Kim Karr”