When the secrets of the past begin to surface, the truth can be disarming…

Twenty-six-year-old Elsie Sherman has had a crush on her brother’s best friend, Henry Logan, since she was twelve years old. Unfortunately, Henry—now an Air Force officer—has only ever treated her like a younger sister, stepping into her brother’s shoes after he was killed in action.

That is, until the night when one dance ignites a sensual fire between the two, leaving Elsie aroused and confused. Is she allowed to lust after her surrogate big brother, who also happens to be her roommate? As the passion between them crosses the line into a territory that teases with the forbidden, Elsie decides to give herself to the man she has always desired. But Elsie is not prepared for where the relationship will take her.

Henry has been harboring two secrets. One can bring them closer together. The other will tear them apart. Now, with each startling new revelation, Elsie realizes that only she can decide if the past can ever be forgiven—and if a future with Henry is worth fighting for. 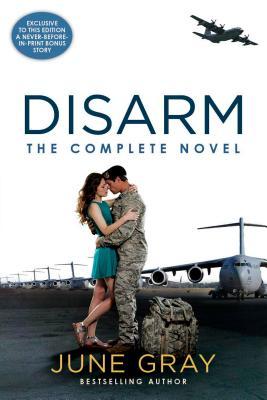 Holy crap. By now, I should realize that books featuring military characters pack a special type of emotional wallop. I thought I was prepared going into this one, but I underestimated the range of emotions I would go through while reading it. Days after finishing this book (and the sequel, Arrest!) and I still haven’t stopped thinking about Elsie and Henry. What characters. What a story.

One thing I can say for sure is that I’m glad I never tried to read this book when it was a serial. With the way some of the parts ended, I think I would have curled up in a ball and cried if I hadn’t been able to begin the next section immediately. I mean, half the time I was ready to curl up and cry anyhow, but that was just from the feels. Having to wait would have just made it worse. This is billed as an erotica novel, and while it was sexy and steamy, I didn’t see it being that much more explicit than most of the other new adult and adult titles I read. Not criticizing, just felt like I needed to mention that.

If you follow my reviews with any type of regularity, you know I’m a sucker for friends first stories. This is one of my new favorites. While it’s true Henry was really Elsie’s brother’s friend first, after Jason’s death, Henry and Elsie became very close friends. What neither knew about the other is that they both were harboring crushes on each other. We readers come in after their friendship is already solid and they’re flirting with the lines and thinking about being something more, but there was no doubt this was not insta-love and what they shared was very real.

It all sounds great, right? Well, then there’s the other thing. The thing where Henry’s in the military and about to be shipped off overseas. They love each other and once he returns, everything will be great for them because the biggest obstacle possible is behind them, right? Oh, if only it was that easy. When Henry returns, he’s not the man Elsie fell in love with. It’s obvious he’s struggling to deal with something, but he’s also not very forthcoming with his feelings. They’re both hurting and while neither makes the conscious decision to hurt the other, it’s what happens. Thus begins the most painful part of their journey. I lost track of how many times I got all teary-eyed and upset with both of them. I was mentally and physically exhausted when I finished this book. I also jumped immediately into the sequel thinking that would help give me some closure and make everything right again. But no, there was more feels to be felt… and that’s another review for another day.

I loved both of these characters, but they both frustrated me beyond belief. Elsie was strong and stubborn and was sure her love for Henry could make everything better. If only it was that easy. Henry wasn’t your typical alpha male. He was fiercely protective and had dominant tendencies, but he was also vulnerable underneath it all. The things he experienced and saw overseas changed him. He definitely had a hero complex and trying to deal with guilt, too. I hated watching these two struggle, but I knew the only way they could be together was to go through it all. Hiding wasn’t going to help.

I was afraid Disarm would destroy me. It didn’t, but it damn sure left a mark. Secrets were revealed – and not just by Henry and Elsie. There was one moment during the book that I won’t spoil for you, but it was so perfect and unexpected that I found myself sitting with tears streaming down my face as I read. It was a beautiful touch and a welcome addition and now I can’t imagine the series without it.

If you decide to pick up this book – which I totally think you should – be prepared. Have tissues on hand. It might not hurt to have your favorite adult beverage around, too. I think you’ll be happy in the end, but the journey is seriously rough. You’ll also want to make sure you have enough time carved out that you can read it cover to cover in one sitting. You won’t want to walk away from it once you’ve started.

One response to “In Review: Disarm – The Complete Novel (Disarm #1-6) by June Gray”