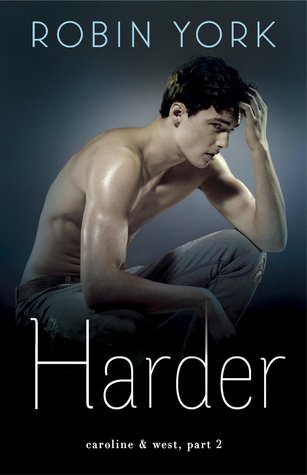 In Robin York’s provocative new novel, two young ex-lovers find themselves together again in the shadow of tragedy—and an intense, undeniable attraction.

Caroline still dreams about West. His warm skin, his taut muscles, his hand sliding down her stomach. Then she wakes up and she’s back to reality: West is gone. And before he left, he broke her heart.

Then, out of the blue, West calls in crisis. A tragedy has hit his family—a family that’s already a fractured mess. Caroline knows what she has to do. Without discussion, without stopping to think, she’s on a plane, flying to his side to support him in any way he needs.

They fought the odds once. Losing each other was hard. But finding their way back to each other couldn’t be harder.

In preparation of writing this review, I opened up my review copy and started to look at some of the quotes and passages I highlighted in the book. That led me to reading the entire thing again, cover to cover, in a couple hours. I felt every emotion as clearly as I did the first time, even though I knew how the story ended this time around.

“I did the impossible and walked away from Caroline. After that, everything in my life that was hard got harder.”

“Don’t waste your whole life,” I tell him. “You’re not going to get another one.”

I don’t think I have ample words to describe how I feel about Caroline and West. I was absolutely devastated at the end of Deeper when they went their separate ways. It just didn’t seem possible. They’d gone through so much together and yet here was life, throwing another impossible situation at them. I won’t get down into the details of this story because really, it’s something best left unspoiled. Just know that not much time has passed since the end of Deeper and neither Caroline nor West are in an ideal place. Life has continued to kick them around – him more than her, but still, neither of these characters can seem to catch a break. I knew reading the synopsis that everything was about to get a lot harder for them and I didn’t know if I could take it. I just wanted them happy and together.

“The world’s not black and white,” she tells me. “Life doesn’t have good guys and bad guys or a beginning, middle, and end. Not while you’re living it. It’s just people doing stuff that’s beautiful or stupid or somewhere in the middle.”

Harder was made of feels and they weren’t all happy ones ones. But my god, I felt every single one of them. From the gut-punch moments that made me want to scream and rage to the sweet moments that left me swoony and teary-eyed and everything in between. This book was a roller coaster ride of emotions. I was so deeply invested in Caroline and West and what they had together, what they should have together.

“There’s a reason they call it falling in love–because of the way it tips you ass over teakettle and then shakes your life up, hard. Don’t get me wrong. There’s nothing like it. No better drug. No adventure more fantastic. But it changes things. It changes you.”

I’m completely and thoroughly in love with both of these characters. Caroline was amazing. The transformation and growth that began in Deeper continued in this novel. By the end? I might have been more in love with her than I was with West. (Ok, probably not. But it was close.) Her strength was awe-inspiring. Not only with the way she continued to deal with the fall out over the revenge porn situation, but the way she helped West and his sister, Frankie. She possessed a strength and determination not all that often seen in a character of her age. West was far from perfect and he knew it. His guilt ate him up inside and kept him from living at times, but he was incredibly strong as well. I admire the way he packed up his life and headed home to save his family, all while sacrificing the things and people that he loved at Putnam. What I loved most was watching him realize that he could build a life for himself and his sister and still have some of the things he always wanted. He was protective, driven, passionate and completely swoon-worthy.

“It doesn’t take anything special to fight back against the world and all the ways it wants to box you in, hold you down, limit you, and keep you from thriving. You just have to know what it is you want to accomplish. You have to know who you want to be with and what you’ll give up to get them. You have to let yourself want what you want as hard as you can, as deep as that goes, even if it scares the fuck out of you.”

I’m in awe of Robin York and what she did with this book. These characters got under my skin and into my heart and I just can’t let them go quite yet. Deeper and Harder will be books that will live forever amongst my favorites and that I will pick up again and again when I just want to feel.

Robin York grew up at a college, went to college, signed on for some more college, and then married a university professor. She still isn’t sure why it didn’t occur to her to write New Adult sooner. Writing as Ruthie Knox, she is a USA TODAY bestselling author of contemporary romance, including RITA-finalists About Last Night and Room at the Inn. She moonlights as a mother, makes killer salted caramels, and sorts out thorny plot problems while running, hiking, or riding her bike.