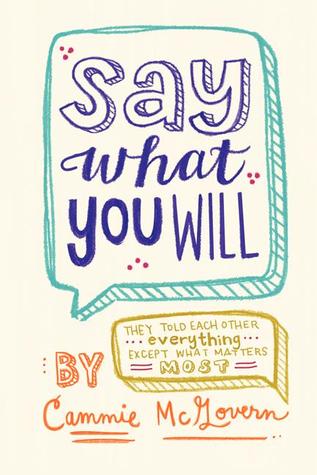 Say What You Will by Cammie McGovern
Genres: Contemporary, Young Adult
Publication date: June 3, 2014
Publisher: HarperTeen
Format: eARC, 336 pages
How I got it: Edelweiss
Add it: Goodreads
Buy it: Amazon | Barnes & Noble
My rating:

I want someone who will talk to me honestly about things. You're the only person who ever has. Maybe you don't know this, but when you're disabled almost no one tells you the truth. They feel too awkward because the truth seems too sad, I guess. You were very brave to walk up to the crippled girl and say, essentially, wipe that sunny expression off your face and look at reality. That's what I want you to do next year. Tell me the truth. That's all.

Amy and Matthew didn't know each other, really. They weren't friends. Matthew remembered her, sure, but he remembered a lot of people from elementary school that he wasn't friends with now.

Matthew never planned to tell Amy what he thought of her cheerful facade, but after he does, Amy realizes she needs someone like him in her life.

As they begin to spend more time with each other, Amy learns that Matthew has his own secrets and she decides to try to help him in the same way he's helped her. And when what started out as a friendship turns into something neither of them expected, they realize that they tell each other everything—except the one thing that matters most.

I’m at a bit of a loss with this book. I kept putting off reading it because I was afraid it would make me an emotional mess. But really, the opposite was true. It didn’t make me feel much of anything, except slightly uncomfortable because of the unflinchingly honest way it addressed everything. Maybe that was the goal, I’m not sure. It made me think and I really believe I’m still processing everything I read, but if I’m honest, it let me down a little. The blurb compares it to John Green and Rainbow Rowell’s books, and with all due respect, I have to disagree. Some of the themes might have been similar, but I never fail to FEEL when reading books written by John or Rainbow. I just didn’t get that with Say What You Will.

There’s not a whole lot of diversity in YA fiction right now – and if you’ve seen the social media campaigns, it is being addressed and people are quite vocal. Say What You Will offered diverse characters and that was one of the best things about it. Not only are the characters diverse, they’re complicated. Amy has cerebral palsy. Matthew has an anxiety disorder. They were both lovely characters. But because the book was written in third person, I missed the connection to them. I wanted in their heads. Amy was smart and funny and blunt. Matthew was sweet and thoughtful and caring. I feel like I missed out on some of the best part of these characters and their growing friendship (and more) by reading it in third person.

The pace of Say What You Will was slow, but I don’t think that was a bad thing. I enjoyed the way Amy and Matthew’s friendship, and the other more complicated feelings, developed. It seemed realistic. It was endearing to watch how they helped each other and how they learned each was more than what they appeared on the outside. I never felt like sitting the book down until the point where the thing happened at the 77% mark that I just couldn’t wrap my head around. I’m sorry, it was a little too farfetched for me and it felt really forced. That’s the only time the book almost lost me, but I wasn’t giving up then. I had to know how the story ended. The ending? A little too vague for my liking, but since I wasn’t wholly invested in the characters, I found it difficult to be too mad about it.

Overall, Say What You Will was a beautifully written, if understated, book. In all honesty, it’s more of a 3.5 stars, but I don’t give halves and I just can’t round it up to 4 stars. The characters were charming and their struggles were believable, but I never fully connected to them because of the third person point of view. I felt more like an observer than someone who was living it with them. I would recommend this book because I think it delivers an important message about looking beyond the outward appearance to find the real person below. I think teens and no-longer teens alike will take something away from this book.

Tags: 3 Star Review, Cammie McGovern, In Review, Say What You Will

One response to “In Review: Say What You Will by Cammie McGovern”