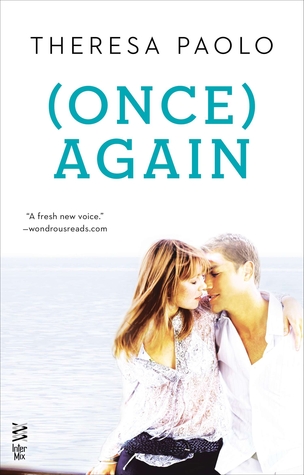 Josh will have to reconcile his past…

In order to make Kat his future.

After surviving a real-life nightmare, Josh Wagner is sent home from his dream college on crutches. Bedridden and tormented by flashbacks, he’s just seen his world shattered and his baseball scholarship go up in smoke. Josh’s family hires a health aide to help take care of him, but when he opens the door, the last person he expects to see is his biggest regret…

Katherine Singleton is the only girl Josh has ever loved. Now, even though she’s only taking care of him because it’s her job, Josh is determined to win her back. But Kat had to move on after their breakup two years ago, and despite her feelings for Josh, a lot has happened since he left…

When Kat’s past comes back to haunt her, Josh decides it’s his turn to take care of her. But protecting her—and redeeming himself—will put Josh in the line of fire again. Will he survive this time?

After finishing (Never) Again, I was excited to get Josh’s full story. Him being wounded in the shooting in (Never) Again played such a big part in getting Liz and Zach back together, but he was still a mystery. I knew he and his sister were close, that he loved to chase girls and that he’d once been in love, but that’s it. There was more under the surface and I needed the full story. I got it in (Once) Again.

The lack of emotional connection to the characters that I felt in (Never) Again wasn’t an issue in (Once) Again. I was already half in love with Josh after the first book and each bit of his story that was unfolded just made me love him more. It was impossible not to love Kat. She was smart, sympathetic and sweet. She was amazingly driven and didn’t need anyone’s help to deal with the rough things she was handling. (Or, you know, so she thought.)

In this book, Josh is dealing with the aftermath of the school shooting and his injuries, feelings of guilt, and the nightmares that just won’t go away. His physical limitations are just part of the problem, but they’re what lead his ex, Kat, back into his life, proving something good can come out of a tragedy. Their breakup was far from amicable and they’ve been completely absent from each others lives since. He learns that he’s not the only one dealing with loss and pain and they slowly start to rebuild what they had before their misunderstanding.

I’ve said it a thousand times and I’ll say it once again; I love a second chance story. The second chance Kat and Josh get is at more than just love, though. Together they work to overcome both their demons. It was easy to empathize with these two and to root for them to heal themselves and find the love they thought they lost again. They had great banter and chemistry and it was apparent how much they cared about each other after all this time.

(Once) Again was a great new adult read. It had feels a’plenty and characters it was easy to love. It was a quick read that I devoured in a couple hours because, once I started it there was absolutely no chance I was putting it down. I thoroughly enjoyed this book and will certainly be on the lookout for more from Theresa in the future.

Theresa Paolo lives in the same town she grew up in on Long Island, NY with her long time boyfriend and their fish. Her debut novel (Never) Again, a NA romance, released in Fall 2013 with Berkley (Penguin). (Once) Again will release this summer. She is also the coauthor of the Amazon bestseller King Sized Beds and Happy Trails and Beach Side Beds and Sandy Paths, a YA contemporary series, under her pen name Tessa Marie. She has a hard time accepting the fact she’s nearing thirty, and uses her characters to relive the best and worst years of her life. She put her love of writing on hold while she received her Bachelor’s Degree in Marketing from Dowling College. When she’s not writing, she’s behind a camera, reading, or can be found on Twitter, Pinterest and Facebook.