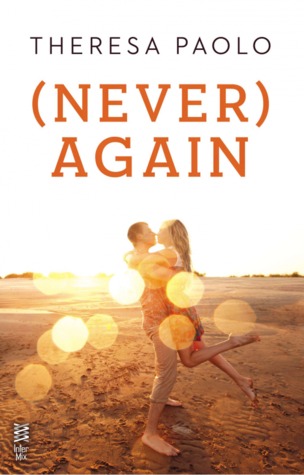 Publication date: October 15, 2013
Publisher: Penguin/InterMix
Format: eARC, 209 pages
How I got it: I bought it!
Add it: Goodreads
Buy it: Amazon | Barnes & Noble
My rating:

Just when she had finally moved on…

When college freshman Liz Wagner hears her ex's voice for the first time since he moved clear across the freaking country, she does what any respectable girl would do: Dive into the girls' bathroom.

Zach Roberts—the Zach Roberts—is back. And he’s everywhere Liz looks—infiltrating her friend group, buddy-buddy with her brother. It’s enough to ruin college altogether. But what choice does she have but to put on a happy face and pretend he didn't leave her vulnerable and alone in a pile of emotional wreckage?

Pretending works, until tragedy strikes and the only person available for comfort is the one person she wants to stay away from. When Zach turns out not to be the jerk she convinced herself he was, but the boy she used to love, Liz needs to decide whether to open her heart again to the boy who tore it out.

Ok, I’ll admit it. The gorgeous cover is what interested me first about this book. I bought it when it was released last October and it got shoved to the side in favor of other new releases and ARCs. I forgot all about it… until I saw the sequel up for review on NetGalley. So, I’m totally playing catch up now.

I love a good second chance love story and was excited to see where this one would go. I enjoyed this book, but I didn’t LOVE it. Liz was a likable enough character, but she was so very wishy-washy about her feelings about Zach and it started to get old after awhile. Her boyfriend, Joe, always seemed like a creep to me, so I had a hard time understanding why she would be so willing to hang on to him and excuse his behavior, but not be willing to hear Zach out. I know she was hurt. The way he left her would hurt anyone, but they were young and it wasn’t like it was his decision to leave town. Liz’s immaturity made it difficult for me to connect with her.

Zach was a great guy. He was dealing with family issues well above what someone his age should be dealing with. He obviously still cared about Liz. The times her boyfriend wasn’t there? He was and it wasn’t like he was doing it to cause drama. He was just a sweet boy who wanted a second chance – or, at the very least, to be friends. I loved how he stood by Liz’s side during the entire book, regardless of how hard she tried to push him away.

(Never) Again was a quick read and it was mostly enjoyable. I can’t say my inability to connect with Liz drastically impacted how much I liked this book, but it did to some degree. I am, however, quite anxious to read (Once) Again. Liz’s brother Josh plays a pivotal role in the first book, yet he was mostly a mystery. I’m really looking forward to finding out his story – and where life’s taken him after the events of (Never) Again.

Theresa Paolo lives in the same town she grew up in on Long Island, NY with her long time boyfriend and their fish. Her debut novel (Never) Again, a NA romance, released in Fall 2013 with Berkley (Penguin). (Once) Again will release this summer. She is also the coauthor of the Amazon bestseller King Sized Beds and Happy Trails and Beach Side Beds and Sandy Paths, a YA contemporary series, under her pen name Tessa Marie. She has a hard time accepting the fact she’s nearing thirty, and uses her characters to relive the best and worst years of her life. She put her love of writing on hold while she received her Bachelor’s Degree in Marketing from Dowling College. When she’s not writing, she’s behind a camera, reading, or can be found on Twitter, Pinterest and Facebook.

One response to “In Review: (Never) Again (Again #1) by Theresa Paolo”