How to Date a Nerd by Cassie Mae
Series: How To #1
Genres: Contemporary, Romance, Young Adult

Publication date: September 24, 2014
Publisher: Swoon Romance
Format: eARC, 231 pages
How I got it: From the publisher
Add it: Goodreads
Buy it: Amazon | Barnes & Noble
My rating:

Zoe has a great pair of legs, perky boobs, and wears exactly what she needs to show it all off. She works hard for the easy sleazy ‘you only wish you were me’ reputation, burying who she really is—an all-out nerd.

The only time Zoe gets to be herself is when she hides under her comforter to read X-Men comics, sending jealousy stabs at everyone who attends Comic-Con. Keeping up her popular rep is too important, and she’s so damn insecure to care about the consequences. But when Zoe’s sister takes her car for a ‘crash and burn into a tree’ joyride, her parents get her a replacement. A manual. Something she doesn’t know how to operate, but her next door neighbor Zak sure as heck does.

Zak’s a geek to the core, shunned by everyone in school for playing Dungeons and Dragons at lunch and wearing “Use the Force” t-shirts. And Zoe’s got it bad for the boy. Only Zak doesn’t want Popular Zoe. He wants Geek Zoe.

She has to shove her insecurities and the fear of dropping a few rungs on the social ladder aside to prove to Zak who she really is and who she wants to be… if she can figure it out herself.

I’m a bit of a nerd myself. Not even of the closeted variety. Sure, I try to keep it from some friends, but I’m pretty sure once I decided to begin a book blog, I was fighting a losing battle to try to keep my nerddom under wraps. And you know what? I’m more than ok with that. I will gladly talk about books and book boyfriends, Joss Whedon TV shows and superheroes with anyone who will listen. Zoe, our heroine, felt a little differently. (Of course, I’m a 30-something lady and she’s a high schooler, so that might have something to do with it, too. It’s been a long time since I spent much energy worrying what others thought about me.)

“Welcome to high school. Where everyone tries to be someone else.”

Anyone who is in high school – or ever was in high school – can relate to Zoe in one way or another. She’s a popular girl who dates all the right guys and is friends with all the right girls. She doesn’t take life too seriously. Sounds like a pretty easy life, right? Well, there’s one tiny problem. She’s totally hiding her true (nerd) self from all her so-called friends and it’s pretty exhausting. But, she’s mostly ok with it – though a part of her really wants the real Zoe, not the made up one, to be accepted. Her next door neighbor and former childhood friend, Zak, is a nerd through and through. From the geeky t-shirts to the glasses, from the gaming to the comic books, he likes it all and has no problem owning up to it. Zak’s a hot nerd though. He’s also completely and totally adorkable and I want one of my own. Too bad he doesn’t have an older brother.

After her sister totals Zoe’s car and her parents buy her a manual to replace it, she swallows her pride and asks Zak to teach her how to drive stick. Zoe’s always had a bit of a crush on Zak, but as they begin to rebuild their friendship, those swoony crush feelings bubble to the surface. Zoe wants Zak. Zak wants Zoe. What’s the problem? Well, he wants the real Zoe, not the fake persona she’s built as her popularity rose. Zoe’s not quite ready to give it all up, but she also doesn’t want to lose Zak.

I never found Zoe unlikable, but I couldn’t help but shake my head at the lengths she went to to disguise her real self and her interests. I couldn’t even fault her for it. Who didn’t mask their real selves, at least partially, in school? She went through a lot of character growth and I absolutely adored her at the end. I loved Zak from the start. He didn’t need any growth at all. 🙂 I enjoyed watching them rebuild their friendship and begin to admit that there was definitely more than just friendship between them.

I’ve yet to encounter a book by Cassie Mae that I didn’t enjoy and the streak continues with How to Date a Nerd! It was sweet and swoony, a story with humor and heart. The characters were great, the banter was funny and realistic and the overall message of the book was fantastic. If you’re a fan of young adult romances – or a closet nerd yourself – you definitely want to pick up a copy of this one. It was a quick and easy read, a total escape I was very grateful for. I’m excited to continue with this series of standalones. 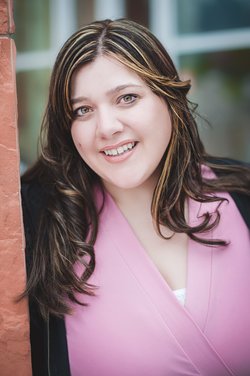 Cassie Mae (who dons the name Becca Ann on occasion) is the author of a few hundred… okay, maybe not that many… books. Some of which became popular for their quirky titles, characters, and stories. She likes writing about nerds, geeks, the awkward, the fluffy, the short, the shy, the loud, the fun.

Since publishing her bestselling debut, Reasons I Fell for the Funny Fat Friend, she has published and sold books to Random House, Swoon Romance, and Spencer Hill Press. She has a favorite of all her babies, but no, she won’t tell you what it is. (Mainly because it changes depending on the day.)

Along with writing, Cassie likes to binge watch Teen Wolf and The Big Bang Theory. She can quote Harry Potter lines quick as a whip. And she likes kissing her hubby, but only if his facial hair is trimmed. She also likes cheesecake to a very obsessive degree.

Tags: 4 Star Review, A Geek Romance, Cassie Mae, From Publisher, How to, How to Date a Nerd, In Review