All her life, Imogene has been known as the girl on THAT blog.

Imogene's mother has been writing an incredibly embarrassing, and incredibly popular, blog about her since before she was born. Hundreds of thousands of perfect strangers knew when Imogene had her first period. Imogene's crush saw her "before and after" orthodontia photos. But Imogene is fifteen now, and her mother is still blogging about her, in gruesome detail, against her will.

When a mandatory school project compels Imogene to start her own blog, Imogene is reluctant to expose even more of her life online...until she realizes that the project is the opportunity she's been waiting for to tell the truth about her life under the virtual microscope and to define herself for the first time.

Don't Call Me Baby is a sharply observed and irrepressibly charming story about mothers and daughters, best friends and first crushes, and the surface-level identities we show the world online and the truth you can see only in real life.

I was immediately drawn to this book because of the subject matter. The concept of growing up on a blog is one that spoke to me, if only because I was appalled at how horrible that would be. I can’t imagine having all your awkward moments and firsts on the internet, thanks to your mom. It’s interesting to think that’s going to be pretty common for the generation that’s growing up right now. It seems like everyone I know who has children is posting about *everything* they do on Facebook. I’m sure those kids will appreciate that one day. I’m glad my parents are both pretty private people. I, on the other hand, put a lot out there on Facebook, Twitter, etc., but that’s my choice. But, I digress.

There were things I enjoyed about this book, and other things that kinda drove me crazy. Through everything, though, I remained interested in the story that was unfolding and I wanted to see it through to the (great) ending. The book felt a little young to me, but that’s a pitfall of being a 30-something who reads YA lit. Every now and then you just feel really old. This was one of those times.

Imogene (aka Babylicious) has grown up on her mom’s blog (aka Mommylicious) and her readers have seen pictures and read accounts of her life for years. I mean, they even chose her name via a contest on the blog. (Yeah, that’s going a little far for me, too.) Well, she’s 15 now and she’s sick and tired of it. Her relationship with her mom is strained at best, and quite frankly, I don’t blame her. I would have gone crazy if my mom behaved like that when I was that age. Truthfully, I still would to this day. There’s interested and then there’s … what her mom is doing.

Imogene and her friend Sage, who also grew up in the blog spotlight of a vegan mom, have had enough. When they’re assigned to write a blog for one of their classes, they try everything they can think of to get out of it. They don’t want to live their lives online anymore. When that doesn’t work, they decide to get even. Their moms want to talk about them online? Well, two can play at that game. Their moms want to put it all out there? They’ll do the same. This tactic, as you can imagine, doesn’t go over well and there’s quite a bit of fallout. In the end, all is made right with the world. Information not known previously is revealed, understanding is met and a compromises are reached. There’s a good message about family, friendship and unplugging every once in awhile in this book.

I mentioned the book felt a bit young to me. That didn’t really affect my review, however. I took the target demographic into consideration. Don’t Call Me Baby was a quick read and one that was well-written, despite some issues I had with the author’s style. Here are the sentences that drove me the craziest:

These were in the first probably 15 pages of the book (estimating here because ebooks don’t always have page numbers). I’m not entirely sure if this is grammatically incorrect or just annoying, but every time I came across one of these contractions, I wanted to scream. It IS ok to use IS. Really. Maybe that’s nitpicky but I don’t care. It was really bothersome.

All in all this was a good book. It was easy to empathize with Imogene and Sage. Their situations felt realistic for this day and age. Do I think they might have gone a little far? Perhaps. But, they had a point to make… and they suffered the consequences. Romance isn’t the focus of this story, but it does play a part. It’s a sweet, innocent first crush type of thing, too. It was cute.

Would I recommend this book? Absolutely, but not to adults like myself who enjoy reading YA lit. This one is definitely better off in an upper middle grade or young adult’s hands. I think they would more easily relate to the characters, their want for privacy and the situations they find themselves in.

I received a copy of this book from the author, via Edelweiss, in exchange for an honest review. Quotes are taken from the review copy and might not be in the finished version. 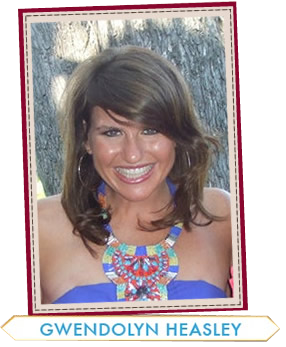 Gwendolyn Heasley is a graduate of Davidson College and the University of Missouri-Columbia where she earned her master’s degree in journalism. When she was a little girl, she desperately wanted to be the next Ann M. Martin- the author of the beloved The Baby-Sitter’s Club series. She’s incredibly grateful that the recession rendered her unemployed and made her chase her nearly forgotten dream. She lives in New York City, teaches college and eats entirely too much mac and cheese for an adult. She’s also currently at work on her third novel for Harper Collins.