Publication date: February 11, 2014
Publisher: Self-Published
Format: eARC, 276 pages
How I got it: From the author
Add it: Goodreads
Buy it: Amazon
My rating:

It was the most important day of her life, and for 21-year-old Isla Edison, graduating from college with a useless degree in vocal performance was all part of her master plan. Dying in a car accident only hours later wasn’t part of that plan. Yet there she was, standing over her own lifeless body and panicking about ruining the truck her parents had bought as a graduation present. Talk about a bad way to repay them.

If coming to terms with the hereafter wasn’t enough to deal with, Isla suddenly finds herself stuck with Hayden, a gorgeous Brit with a bad attitude and a penchant for throwing her off cliffs to keep her in line. Worst of all, Hayden is her Guide, and until she completes six impossible and totally random tasks to reach her mysterious Destination, she’s stuck with him. Isla’s major problem, though, is that she doesn’t know what reaching her Destination actually entails, and soon the mystery surrounding her new afterlife seems more ominous than any purgatory she could possibly imagine. Now Isla must decide if she’ll trust her dark and brooding Guide despite his “bad boy” act, or if she’ll risk failing her tasks and facing the unknown alone.

“It was a hard, dry pill to swallow that all of those sappy love songs had been right all along. You never know what you had until it was gone. Just like you never really knew how to feel alive until you were already dead. At least, I didn’t really know what living was until I had died.”

When I first read the blurb or Under Zenith, I imagined it would be similar to If I Stay or Before I Fall. It may share some similarities, but they’re few and far between. I enjoyed all three of them nearly equally, but for different reasons. While Under Zenith didn’t have the emotional pull of If I Stay, it had something special in its own right. I’ve never read a book quite like it. It held my attention from start to finish and felt like a giant puzzle I was trying to put together. Both Isla and Hayden were great characters. I felt bad for Isla. She was so lost, so very confused. Yet, her first thoughts after realizing she was dead were not ones of pity. She was concerned about what her death would mean for the ones she loved. Hayden made a great Guide for her. He was difficult to get a read on, but once all the pieces fell together… holy crap.

Under Zenith was a super quick, unique and intriguing read. It’s hard to categorize this story, too. It begins as though it’s a contemporary, but quickly veers off into the more fantasy or sci fi realm. There’s a bit of romance with a super-swoony British boy with a big attitude, quite a bit of dramatic, action-filled tests by the heroine and ultimately a big twist that definitely took me completely by surprise. That was my favorite part of the book; the moment it ALL made sense and all the smaller and somewhat unexplained pieces fell into place. I only wish it had been a bit longer. As far as I know, this is a standalone, but I found myself wanting more of the story when I was finished. 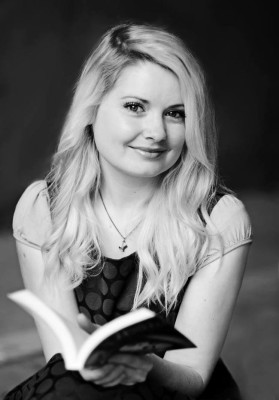 Shannen Crane Camp was born and raised in Southern California, where she developed a love of reading, writing, and anything having to do with film. After high school, she moved to Utah to attend Brigham Young University, where she received a degree in Media Arts and found herself a husband in fellow California native Josh Camp. The two now live in either California or Utah... they still can't decide.

3 responses to “In Review: Under Zenith by Shannen Crane Camp”