The Deep End of the Sea by Heather Lyons
Genres: Fantasy, New Adult, Romance
Publication date: February 4, 2014
Publisher: Self-Published
Format: eARC, 288 pages
How I got it: From the author
Add it: Goodreads
Buy it: Amazon | Barnes & Noble
My rating:

What if all the legends you’ve learned were wrong?

Brutally attacked by one god and unfairly cursed by another she faithfully served, Medusa has spent the last two thousand years living out her punishment on an enchanted isle in the Aegean Sea. A far cry from the monster legends depict, she’s spent her time educating herself, gardening, and desperately trying to frighten away adventure seekers who occasionally end up, much to her dismay, as statues when they manage to catch her off guard. As time marches on without her, Medusa wishes for nothing more than to be given a second chance at a life stolen away at far too young an age.

But then comes a day when Hermes, one of the few friends she still has and the only deity she trusts, petitions the rest of the gods and goddesses to reverse the curse. Thus begins a journey toward healing and redemption, of reclaiming a life after tragedy, and of just how powerful friendship and love can be—because sometimes, you have to sink in the deep end of the sea before you can rise back up again.

I have a very limited knowledge of mythology. It was something that I never paid a lot of attention to, but I find myself more intrigued by it with each reimagination/retelling book I read. But even I had heard the stories of Medusa. Just not quite like this one…

“I am a monster. The worst kind of monster. The kind that people have told stories about for thousands of years.”

The Deep End of the Sea showed the human side of the monster we all knew as Medusa. Snakes for hair, eyes that will turn anyone to stone… you know the one. But did you ever wonder how she became that way? This book explores the (I’m assuming somewhat fictionalized) events that led her to her fate. I was so impressed with Heather Lyons’ Medusa. She was kind-hearted and compassionate, even when she was a monster. She grieved for every life she inadvertently took. There were things she couldn’t change about her situation, but she was good underneath where it mattered.

“I am in love with you,” he whispers against my mouth. “Desperately. Hopelessly. In. Love. With. You.”

Can I just take a minute to gush over this version of Hermes? He was one of the few people who cared about Medusa as she was and wasn’t afraid of the monster she had transformed into. He was a source of comfort and protection, her closest friend and eventually more than that. They were so obviously right for each other, so perfect together.

This book was interesting and imaginative and it held my attention. I had no idea walking into it where it would ultimately wind up and there were enough twists and turns to keep me guessing without feeling like it was just too much. The characters were compelling and complex. Even the secondary characters, all names anyone who knows anything about mythology will recognize, were all memorable in their own way.  The romance was completely swoony.

Heather Lyons did a brilliant job with The Deep End of the Sea. It’s one of the best retellings I’ve read in a long time. I’m not dipping into the plot in my review because I don’t want to run the risk of spoiling this unique, intriguing story. Fans of romance, mythology and retellings won’t want to miss this story of love, growth and hope.

I received a copy of this book from the author in exchange for an honest review. All quotes come from the review copy and may differ from the final version. 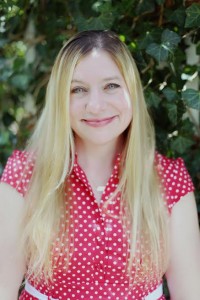 Heather Lyons has always had a thing for words—She’s been writing stories since she was a kid. In addition to writing, she’s also been an archaeologist and a teacher. Heather is a rabid music fan, as evidenced by her (mostly) music-centric blog, and she’s married to an even larger music snob. They’re happily raising three kids who are mini music fiends who love to read and be read to.

Tags: Heather Lyons, In Review, The Deep End of the Sea

3 responses to “In Review: The Deep End of the Sea by Heather Lyons”