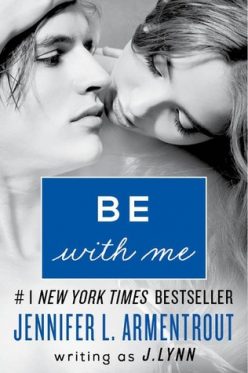 Be with Me by Jennifer L. Armentrout
Series: Wait for You #2
Genres: New Adult, Contemporary, Romance
Publication date: February 4, 2014
Publisher: William Morrow
Format: eARC, 299 pages
How I got it: Edelweiss
Add it: Goodreads
Buy it: Amazon | Barnes & Noble
My rating:

Teresa Hamilton is having a rough year—she’s in love with her big brother’s best friend, but he hasn’t spoken to her since they shared a truly amazing, mind-blowing, change-your-life kiss. She got out of a terrible relationship. And now an injury is threatening to end her dance career for good. It’s time for Plan B – college. And maybe a chance to convince Jase that what they have together is real.

Jase Winstead has a huge secret that he’s not telling anyone. Especially not his best friend’s incredibly beautiful sister. Even though he and Teresa shared the hottest kiss of his life, he knows that his responsibilities must take priority. He certainly doesn’t have time for a relationship. But it doesn’t help that all he can think about kissing the one girl who could ruin everything for him.

Theresa and Jase know each other through her older brother, Cam. She’s been crushing on Jase since she met him (understandably!), but with the exception of one kiss, he’s never given an indication he thinks of her as anything more than a little sister. But believe me, he does. JLA tells the Theresa and Jase’s story with her trademark heart and humor. It’s absolutely another of the unputdownable variety.

Jase. My word. This boy is hot, deep and absolutely perfectly imperfect. A country guy with a soft heart, he’s a good guy with a lot of baggage. The things he said made me all melty. His chemistry with Theresa was out of this world. It was obvious he cared a lot about her. Theresa was a likable main female character. I’d be friends with her. She might not have had the same amount of baggage Jase had, but she’s been through her fair share of crap recently. With her injury, she finds her future unclear and she has to do a lot of adapting. Part romance, part coming of age story, part focusing on friendship and family relationships, Be with Me truly had it all. It also had its fair share of surprises along the way and it hit on some pretty serious issues that I wasn’t expecting at all.

Be with Me was swoony, sexy, sweet, suspenseful and surprising. I can’t tell you just how much I loved this book. The characters were fantastic. The plot was realistic. I felt all the feels… and then some. You all know I love JLA’s books, regardless of whether they are YA or NA, contemporary or paranormal, but this is my new all-time favorite across all the genres. I thought it didn’t get any better than Cam from Wait for You, but I was wrong. So very wrong. Jase is officially my new favorite book boyfriend… at least of the NA genre. 😉 So many swoony boys, so little time.

Tags: 5 Star Review, Be With Me, In Review, J. Lynn, Jennifer L. Armentrout, Wait for You