If Only We by Jessica Sankiewicz
Genres: Contemporary, Romance, Young Adult
Publication date: October 27, 2013
Publisher: Self-Published
Format: eARC, 187 pages
How I got it: From the author
Add it: Goodreads
Buy it: Amazon | Barnes & Noble
My rating:

They say all it takes is one wrong move and you lose the game. One false step and you’re trapped. One slip-up in your choice of words and you ruin a friendship forever. That is what they say. They say I lost.

I do not believe them.

At the end of the summer after graduation, Adrienne wonders what happened to cause her life to be in ruins. She isn’t getting along with her mom, her stepsister isn’t talking to her, and, to top it off, the boy she’s been in love with doesn’t want anything to do with her. She believes the turning point was a choice she made at graduation. When she wakes up the next day, she has been transported back three months to that moment, the one where everything started to fall apart.

Adrienne realizes she has been given a second chance—and this time she doesn’t want to mess anything up. Reliving the entire summer, though, turns out to be a lot harder than she thought. As the same days and weeks go by, she starts to see how simple decisions can make a huge impact on the world around her. Despite knowing some of what lies ahead, there are some things she didn’t anticipate. She thought she knew what mistake led her to where she ended up the first time. She was wrong.

And by the time summer is over, she discovers what was really at stake.

“It’s like exposing film to the light. All of the pictures are ruined instantly. Drained of all color, just like my face in that moment. I had just given him my heart. Bared my heart open. Wide open. Let him in. Allowed him to stomp down, shatter, crush and tear to pieces the last of the love I had to spare in me.”

It’s never easy to admit to your best friend that you have more than friendly feelings for them. That’s exactly what Adrienne does the night of her high school graduation. She tells Chevy she wants to date him and he crushes her hopes by telling her he doesn’t feel that way about her. Devastated, she decides to leave town for the summer. When she comes back, Chevy’s dad has passed away and their friendship has been damaged beyond repair – not because of her confession, but because she wasn’t there for him when he really needed her. She wishes there was something she could do to salvage their friendship and her wish is granted. She’s given a second chance to go back and make things right.

“Not everything in life is going to be perfect. Until we can accept that, we will never truly learn how to live. We can pull through the bad times and come out renewed, ready for the next challenge. Life is what we make of it. You just need to be there.”

Adrienne’s sent back in time to the morning of her high school graduation. She has a lot of decisions to make about how to handle everything in her life: her friendships, familial relationships, everything. As she’s reliving these times, she realizes that not everything can be fixed. Some things are meant to happen and regardless of what you do, you can’t stop them. She learns valuable lessons about life and love, friendship and herself along the way.

I really enjoyed If Only We. The concept was intriguing. It reminded me a bit of the movie Thirteen Going On 30. Adrienne was a very likable, relatable heroine. After all, who among us hasn’t made a mistake and wished they could go back and undo the damage they did? She was determined to fix more than just her friendship with Chevy. She wanted to fix her relationship with her sister and her mom. She wanted to keep Chevy’s dad from making the mistakes that ultimately led to his death. She wasn’t shallow. She was selfless and honestly trying to fix everything that went so wrong the first time around. I liked the friendship between Adrienne and Chevy. They were sweet together. This book just left me with a warm, fuzzy feeling – something I definitely like in my young adult reads.. 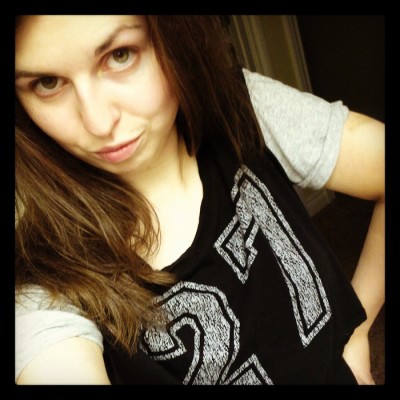 Jessica Sankiewicz is the author of the New Adult novella series, This Night. You can often find her either reading or marathon watching TV on DVD, her favorites being Castle and Veronica Mars. She frequently mismatches her clothes and giggles uncontrollably. She knows almost every Billy Joel song by heart. She collects books and toys, and she has an intense love of cats and lemurs. Jessica decided when she turned 27 that she would remain 27 forever. Currently in the midst of her quarter-life-crisis, she is still takin' names and getting very close to reaching an epiphany.

Tags: 4 Star Review, From author, If Only We, In Review, Jessica Sankiewicz

0 responses to “In Review: If Only We by Jessica Sankiewicz”