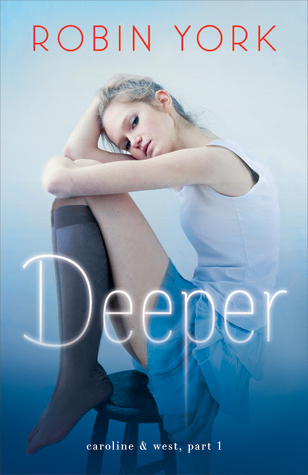 When Caroline Piasecki’s ex-boyfriend posts their sex pictures on the Internet, it destroys her reputation as a nice college girl. Suddenly her once-promising future doesn’t look so bright. Caroline tries to make the pictures disappear, hoping time will bury her shame. Then a guy she barely knows rises to her defense and punches her ex to the ground.

West Leavitt is the last person Caroline needs in her life. Everyone knows he’s shady. Still, Caroline is drawn to his confidence and swagger—even after promising her dad she’ll keep her distance. On late, sleepless nights, Caroline starts wandering into the bakery where West works.

They hang out, they talk, they listen. Though Caroline and West tell each other they’re “just friends,” their feelings intensify until it becomes impossible to pretend. The more complicated her relationship with West gets, the harder Caroline has to struggle to discover what she wants for herself—and the easier it becomes to find the courage she needs to fight back against the people who would judge her.

When all seems lost, sometimes the only place to go is deeper.

Do you see that? “Caroline & West #1″… Best. News. Ever. I didn’t realize this was part of a series when I began reading, but holy crap, I could do cartwheels because I’m so happy about it. I’m not ready to let these characters go yet.

“When you’ve got a shot at deeper, you have to fist your hands in its T-shirt and pull it closer. Tug until fabric rips. Yank at it, reel it in until it’s naked up against your belly and you’re starving and full, desperate and satiated, dizzy and grounded.”

Deeper was an incredible book. It was deep and beautifully written. It dealt very honestly with some very deep issues. It was raw. The chemistry between Caroline and West was powerful. There were elements about their relationship that reminded me so much of Katja Millay’s The Sea of Tranquility – one of my all-time favorite books. The friendship between Caroline and Bridget was fantastic. I’m absolutely in awe of this book.

“You arm yourself with love, friends, knowledge. You figure out who you are. What you want. You figure it out, and you go after it with everything you’ve got.”

There’s just so much about this book that is fantastic. Everything from the characters and their development to the writing itself and the up and downs of the plot to the brilliant dialogue is absolute perfection. I devoured it in an evening, staying up way past my bedtime because I just couldn’t think of putting it down until I found out what happened. The storyline was robust. There were so many different elements that I couldn’t begin to predict what would happen next.

Caroline was a good girl. A good girl who dated the wrong guy. A guy who ended up posting “revenge porn” photos of her, along with her name and contact info, all over the internet. Now her future plans of being a judge and eventually being in public office are hanging in the balance of one dumb decision. I felt such deep sympathy for Caroline because of the mess she was dealing with. What her ex-boyfriend Nate did to her had to be one of the most heinous betrayals possible. The abuse that she dealt with – the phone calls and rude comments and everything else – was disgusting. It’s so difficult for me to believe that someone would be capable of doing something like that to a person they once cared about, but I know it happens. I just can’t wrap my head around it.

“Love is what fucks people up. Love is the undertow.”

West, a baker, drug dealer and waiter with a very colorful past, isn’t perfect- far from it actually – but it didn’t matter. He was a beautifully broken man who wants to fix other people. He was fiercely protective, mysterious and sexy as hell. There was an intensity to him that just jumped off the pages, regardless of who he was interacting with. But there was something magical about his scenes with Caroline, whether they were pretending to be not friends, friends or something in between. The sexual tension leaped off the screen and when they finally gave in to their desires, I thought my iPad might combust.

“Bridget likes to pretend West and I have a silent, simmering affair going on. I like to pretend he and I are complete strangers. The truth is somewhere in the middle.”

Because the book is told from dual perspectives, readers get a great look into the minds and motivation of both Caroline and West. They were both broken, complex characters. I desperately wanted them to fix each other… and themselves along the way. I know the term “emotional roller coaster” can be overused when it comes to describing books, but it’s a perfect way to describe this one. I connected deeply with these characters and the author’s writing was so realistic and beautiful that I felt like I was experiencing everything with them. This book grabbed me immediately, held on tight and didn’t let go until the last page. I wanted it to go on forever and to say I can’t wait for the next installment of Caroline and West’s story would be a gross understatement.

Robin York grew up at a college, went to college, signed on for some more college, and then married a university professor. She still isn’t sure why it didn’t occur to her to write New Adult sooner. Writing as Ruthie Knox, she is a USA TODAY bestselling author of contemporary romance, including RITA-finalists About Last Night and Room at the Inn. She moonlights as a mother, makes killer salted caramels, and sorts out thorny plot problems while running, hiking, or riding her bike.