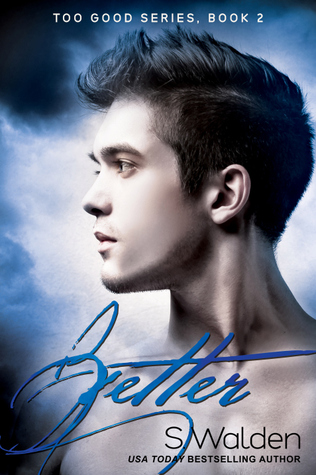 Their relationship has been exposed, and now their lives are changed forever.

For Cadence Miller, the fast track to adulthood proves intimidating and frustrating. She’s a little girl lost—abandoned by her family and uncertain of her future. She doesn’t think she “fits” anywhere. She’s eighteen. She wants to be older. And the result is both comical and heartbreaking.

Mark Connelly will do anything to provide Cadence a stable, loving home—to be her protector. But he’s just as broken and lost, and his heart won’t let go of his past so easily. He knows he should share his secret with Cadence. He should trust that she’ll understand. But what if she doesn’t? What if their love doesn’t grow stronger?

What if it doesn’t get better?

Summer Walden has done it again. As good as Good was, Better is better. 🙂 Where Cadence and Mark’s relationship in Good made me uncomfortable because of their age difference, the fact she was his student, and the way he ordered her around, Better made it all better. Any anxiety I had about their relationship faded. Each character grew tremendously in this book. Where I was mostly ambivalent about both Cadence and Mark after reading Good, I grew to like and appreciate them in Better. I feel like I have a better understanding about them, their histories and their relationship.

“Because I love you. madly. You’ve infiltrated my brain. Driven me crazy.”

One of the things that made me so uncomfortable while reading Good was how controlling Mark was. After learning about his painful history, I realize now why he wanted to control her. Everything that happened with his relationship with Andy had been so out of his control, he was looking for a way to regain control. He was able to do that with Cadence. My heart broke for Mark when I learned his story. It really explained volumes about him. While he still said things that made me cringe in this book (mostly during their sexual escapades), I had a better grasp of who he was and WHY he was like he was. Also, Cadence’s age made a difference in this book. It didn’t seem quite as creepy this time around.

I found Cadence incredibly immature in Good. In Better, she acts like a teenager. After learning the truth about Mark’s past and the lies (or omissions), she tested the boundaries of her relationship with him. I could understand why she was hurt, but I felt like she was being unfair to him. After reading Good, I didn’t think I would be taking Mark’s side, but I definitely did in this book. Thankfully Cadence grew up in this novel. She matured and, with time, she was able to accept Mark and his past.

“You read the Bible for smut?”
Avery giggled. “My freaking Kindle’s broken. I can’t access any of my go-to books.”

I would be remiss if I didn’t mention Avery. She was incredible in this book. I didn’t have a great read on her after Good, but after Better, that changed tremendously. She was funny and thoughtful and a good friend to Cadence when she needed one. Her relationship with Dylan was really cute and I enjoyed following them. She came close to overshadowing Cadence. I hope she gets a book of her own in the future. The relationship between Cadence and her brother Oliver was also quite moving in this book. They’ve found common ground and they are stronger because of it.

“I’m mad for you. I’ll do anything for you. I’ll take on the whole world. I’ll rescue you. Always, Cadence. You tell me, and I’ll do it.”

I thoroughly enjoyed this book. I felt sympathy and emotions for these beautifully broken characters. The story was unpredictable and not cliched. Better is an emotional story of love and loss, secrets and forgiveness, second chances and growth. It was a fitting end to Mark and Cadence’s story. The fact that it was told from Mark’s perspective made it that much better.

S. Walden used to teach English before making the best decision of her life by becoming a full-time writer. She lives in Georgia with her very supportive husband, who prefers physics textbooks over fiction and has a difficult time understanding why her characters must have personality flaws. She is wary of small children, so she has a Westie instead. She is the USA Today bestselling author of Going Under. When she’s not writing, she’s thinking about it.