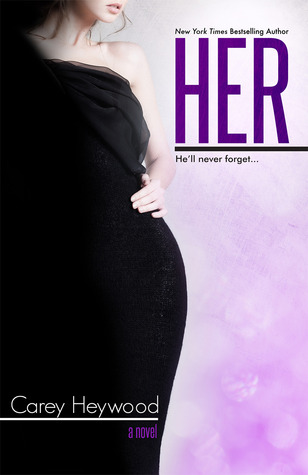 Her by Carey Heywood
Series: Him #2
Genres: Contemporary, New Adult, Romance
Publication date: October 26, 2013
Publisher: Self-Published
Format: eARC, 213 pages
How I got it: From the author
Add it: Goodreads
Buy it: Amazon | Barnes & Noble
My rating:

You know her side of the story, now learn his.

"It was useless. I felt branded beneath my skin by a girl who left without even saying goodbye."

When Will Price was assigned a partner for a sixth grade class project he had no idea she would become his best friend. After years of friendship, she eventually became so much more.  Then, one day she left with no explanation.

Will’s life shattered right before his eyes and he was left alone to pick up the pieces.  Floundering without her, Will must figure out a way to carry on, to find a way to exist without her.

Seven years later, a chance encounter leaves him desperate to get her back. He has one week to make her his again.  Not everyone gets a second chance with the love of their life and Will is determined to never lose her again.

“What do you do when the girl you’re in love with runs away?”

When I read the first book in this series, Him, a few months ago, I really enjoyed it. I’m a sucker for a book where the characters have a history with each other and are reunited for one reason or another. Second chances are one of my favorite plot devices, especially when it feels real and I can connect with the characters. That was absolutely the case with Him. It’s even more true with Her. Him was told from Sarah’s perspective; Her from Will’s. But it’s more than just a switch in the perspective, it’s an addition to Sarah and Will’s story. It spans more time in their history… and future.

“She is still wearing the ring I gave her over a decade ago. That has to mean something. It means, whether she knows it or not, that she is still mine.”

If you read Him (and if you haven’t, why not?!), you know the basics of the story… Girl meets boy and they become friends. Both date other people and eventually realize they’re in love with the other. Confessions. Girl and boy date. There’s a misunderstanding and girl runs away. Boy and girl come face-to-face years later and the old feelings are still there. It’s as though they were waiting all those years to find their way back to each other. It’s sweet (and maybe not entirely realistic), but anyone who has a person like that in their past wishes it happened like it did for this boy and this girl.

“I miss what Sarah and I once had. It might be crazy to still be hung up on the girl I dated my senior year of high school, but she was so much more than that. She was my best friend.”

Sarah and Will come face-to-face with each other for the first time in seven years on a plane. Not an ideal place for a reunion, but at least it gives them some time to talk. She’s heading back home for her brother’s wedding. Will still lives in their hometown and he’s heading back there after a business trip. Sarah doesn’t realize that Will and her brother are best friends, that he’s responsible for introducing her brother to his future wife or that he’s in the wedding. Sarah’s walls are up. Will is just thrilled to have her back around and desperate to find out what happened all those years ago. It takes some time for Sarah to open up to Will. Will was an open book. (Have I mentioned I love a sensitive guy?) They longer they spend together, the more apparent it is that their feelings are just as strong as they were seven years ago, if not stronger, and that they absolutely belong together.

“I’ve loved you and only you, Sarah, for the last seven years. When you left, I never got over it.”

What I loved most about this book – and it was difficult to pick just one thing – is the amount of Will’s vulnerability, and the depth of his feelings, it showed. The first book dove right in. This one had more of a slow build. We’re in Will’s head from the time they met, through when they became friends, until they became more and Sarah left after a misunderstanding, leaving him brokenhearted and bewildered. I feel like I got a better grasp of their history and his feelings. Will’s character development was excellent. He was in love and determined to do whatever he could to find out how Sarah felt, what caused a rift between them in the past, and if they still have a future together. And all this with very little angst! Don’t get me wrong, I enjoy dark and angsty, but sometimes sweet and fluffy feels pretty good. I love a good happily ever after, especially when it’s between characters I adored as much as Will and Sarah. This was a beautiful story about love and second chances. I was left with a tear in my eye and a smile on my face.

New York Times and USA Today bestselling author with six books out and many more to come. She was born and raised in Alexandria, Virginia. Ever the mild-mannered citizen, Carey spends her days working in the world of finance, and at night, she retreats into the lives of her fictional characters.

Supporting her all the way are her husband, three sometimes-adorable children, and their nine-pound attack Yorkie.

Tags: 4 Star Review, Carey Heywood, Her, Him, In Review