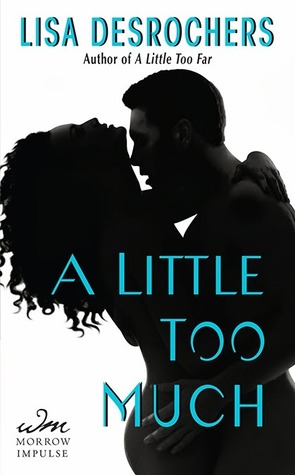 A Little Too Much by Lisa Desrochers
Series: A Little Too Far #2
Genres: Contemporary, New Adult, Romance
Publication date: November 12, 2013
Publisher: William Morrow
Format: eARC, 416 pages
How I got it: Edelweiss
Add it: Goodreads
Buy it: Amazon | Barnes & Noble
My rating:

In the follow-up to Lisa Desrochers’ explosive New Adult novel A Little too Far, Alessandro Moretti must face the life he escaped and the girl he loved and left behind.

Twenty-two year old Hilary McIntyre would like nothing more than to forget her past. As a teenager abandoned to the system, she faced some pretty dark times. But now that’s all behind her. Hilary has her life on track, and there’s no way she’ll head back down that road again.

Until Alessandro Moretti—the one person who can make her remember—shows up on her doorstep. He’s even more devastatingly gorgeous than before, and he’s much too close for comfort. Worse, he sees right through the walls she’s built over these last eight years, right into her heart and the secrets she’s guarding.

As Hilary finds herself falling back into love with the man who, as a boy both saved and destroyed her, she must decide. Past or future? Truth or lies?

“Just like in Shakespeare, when you fall head over heels in love with someone you don’t even know, it’s never going to end well. Love killed Juliet when she was thirteen. I made it all the way to fourteen before it nearly killed me.”

Hilary McIntyre is twenty-two and living in New York City with her boyfriend. She’s trying desperately to make it big as an actress. She’s also trying to forget her past. It’s working pretty well until her past shows up on her doorstep. Literally. Alessandro Moretti has traveled to New York to see firsthand how Hilary is. He never meant for her to know he was there, but fate intervenes and they’re face-to-face for the first time in eight years.

To say Hilary and Alessandro have a complicated past would be a ginormous understatement. They had very strong feelings for one another once upon a time, but their time together back then didn’t end well. They’re both damaged and broken, but for very different reasons. Hilary never quite got over the fact that Alessandro disappeared from her life all those years ago. Alessandro feels guilt for leaving her – and about other things that happened when they were at the foster home together. He feels remorse over the death of his brother, Lorenzo, who was … well, not a very nice guy. He worked over both Hilary and Alessandro in the past. But, he’s gone now and Alessandro is trying to ease his guilt.

“You meant something to me, Hilary. You were important to me once. I just needed to know you were okay. I needed to see for myself.” He shakes his head. “You were never supposed to know I was here.”

I liked Alessandro in A Little Too Far. A lot. He was swoony, sexy and sincere. I can absolutely understand why Lexie was attracted to him. There was just something that bothered me about him. I know now what it was. It’s that he just didn’t fit with Lexie. She belonged with Trent. I fell head-over-heels in love with Alessandro in this book. There was so much more to him than met the eye. Sure, in ALTF, we readers learned about his troubled past and the violence and drug use that occurred, but we didn’t get the whole story. There’s much more to learn. He’s steaming hot and sexual, he has a great sense of humor, he’s on a quest for closure and absolution, he’s conflicted. He is kind-hearted and a good person. We got a dose of all of this with Lexie in ALTF, but it was just so much stronger in this book. It was a little hard to believe that this Alessandro almost became a priest. Thankfully for us all, he didn’t.

“But now Alessandro’s here, and I feel the dead parts of me coming back to life. Being with him again might gain me back my soul, but at what cost?”

Hilary and Alessandro try to put the past behind them and be friends again. He decides to stick around New York a little longer than he originally intended. She’s been in the city for quite awhile, but hasn’t really seen much of what it has to offer. Together they begin to explore the sites – and ultimately their feelings for each other. The scenes with them just hanging out around the city are some of my favorites, because a) I love love love New York and Lisa’s writing made me feel like I was there and b) their chemistry is so strong, their personalities so well-matched, that they just left me smiling.

“I have no right to want to touch you, and yet I want that more than anything – to convince all of my senses you’re really here after all this time.”

As time goes on, Hilary wonders what having Alessandro back in her life really means. It’s obvious that they both still have strong feelings for the other. Their chemistry leaps off the page. There’s a slow burn of sexual tension. But more than all the physical stuff, they share genuine, intense feelings. They’re both so much better when they’re together. Will they be able to overcome their pasts and have a real future together? Will he leave again and break her fully this time? Will he be able to get past his guilt for what happened in their past and with his brother? You just need to read it for yourself to find out.

Maybe I’m blind, but I didn’t see the twist in this book coming. I literally gasped. Then, just so I wouldn’t forget, I made a note in my Kindle app with “GASP!” written again. It all made perfect sense, but I definitely didn’t figure it out on my own. It, to me, is what made the story. Don’t get me wrong, I’m sure I would have loved Hilary and Alessandro just as much had the story not gone in the direction it did. But this added another level of emotion to their relationship and their history. Some of my favorite scenes in the book, the ones I won’t talk about because I refuse to spoil anything, happen as a result of this revelation.

Lisa Desrochers has rocked my world once again. A Little Too Far landed her on my auto-buy author list. A Little Too Much moved her to the top. I got everything I wanted in this book: second chances, smoking-hot sexy scenes and true love. It took me on a full rollercoaster ride that I wouldn’t trade for anything. Sweet, heartfelt and beautifully-written, this is one of my favorite books of the year. (Even higher on the list than A Little Too Far, which I swooned and gushed over a few months ago.)