Unexpected by Dulaney-Glen
Genres: Adult, Contemporary, Romance
Publication date: May 17, 2013
Publisher: Self-Published
Format: eARC, 340 pages
How I got it: From the author
Add it: Goodreads
Buy it: Amazon | Barnes & Noble
My rating:

Ian wasn't ready to meet Grace Holtsen. In no way was he prepared for her. But can you ever be ready for fate to step in? Can you ever be ready to meet the one person who will change your entire existence? Ian knew that Grace would change everything he was used to, but something about her made it worth it. For the first time somebody seemed worth the risk. Will Ian jump and let fate wait for him at the bottom? Hoping that it can somehow save him...hoping that Grace can somehow save him.

I don't think Grace is like most girls. Maybe that's the thing that I can't put my finger on. Maybe for the first time, I've met a girl that's unlike anyone that I've ever known.

Grace, a single mother and owner of a Nashville recording company, met Ian Paul, a recent college grad and her new employee. The moment he entered her world, it turned upside down. She knew better than anyone that a relationship with Ian would never work. He was never supposed to fit into her life, and she was never supposed to show up in his. But what happened between them was something more than either of them ever anticipated. Grace was unprepared for how bad it would hurt when they were faced with something far more unexpected.

He stole the rest of my heart tonight. I know that no matter what happens tomorrow, or days from
now, I’ll never want it back. I could never give it to someone else.

“Opportunities are sent in unexpected ways. Feelings, moments when life’s path becomes clear. Surprises, that seem truly unimaginable, and encounters, fueled by fate. It is because of these rare moments in life that one must embrace what has been given, live in the now, and relish in the future. Sometimes all we need is to have faith in the unexpected.”

The prologue to this book sucked me in. I had to know what happened to cause this man to feel like this. What lies had she been keeping? What brought them to this place? It was a powerful prologue and it was all I needed to be completely invested in the characters. I was more than a little puzzled as I got into the book. It seemed so out-of-character for Grace to have put Ian in this spot. I was absolutely floored when I learned the truth. It was totally… unexpected.

“He stole the rest of my heart tonight. I know that no matter what happens tomorrow or days from now, I’ll never want it back.”

The pace of this book is pretty slow, for the most part. Beautifully slow. We get to know Ian and Grace as they get to know each other. I adored both of them. They’re such likable characters. No clichéd characters here. Despite the age difference, the fact that they are co-workers and that Grace is a mother to a nearly teenaged boy, they work wonderfully together. Their passion for each other didn’t threaten to ignite my iPad like a lot of the new adult novels I read. It was understated, but no less powerful. Their attraction was very real and their feelings very deep. I could feel the love between them.

“I like to think that maybe fate had a hand in putting me in her life, and her in mine. That maybe that day it was decided by someone, that Grace was meant for me. That it couldn’t be then because we weren’t in the same place in our lives. But now, now is the time that we are meant, and that someone somewhere knew that. That we were planned. That this was planned.”

There was so much more to this book than just Grace and Ian’s relationship and their journey. It was about friends and family. Loss and moving on. Finding yourself and forgiving others. Grace’s best friend Nina plays a prevalent part in this story. I. Loved. Nina. She deserves a book of her own. She was strong and protective. She’s the kind of friend we should all hope to be, or hope to have. There were so many special moments in this book that I can’t even begin to talk about them. If you’re an emotional reader like I am, you might want some tissues on-hand. As events unfolded, I think I used half a box. (Don’t fret, it’s not completely heartbreaking. Your favorite characters will still be present and accounted for at the end of the book.)

I don’t think I can say much else without fear of giving away part of the plot. Just know that this is a book you will want to read if you enjoy contemporary romance. The characters are rich. The plot is unique. The writing was heartfelt and beautiful. I couldn’t have asked for more. This book couldn’t have had a more fitting title. It took me by surprise in every way possible. I can’t wait to read more from this writing duo in the future. 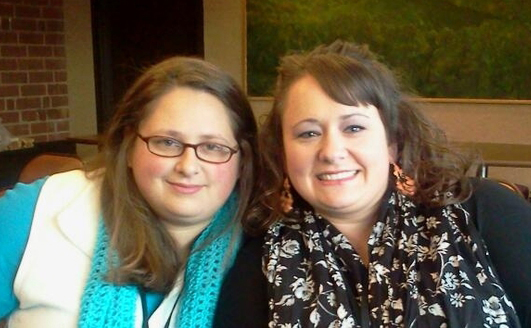 K. Dulaney was born, raised, and still resides in the Mountains of North Carolina. She is the proud mother to an amazing little boy, and happily married to her high school sweetheart. Dulaney attended Southern Universities and obtained her Bachelor’s Degree in Psychology and a Masters in Family Studies. Her passion for reading and books began at very early age, and Dulaney dreamed of one day writing stories of her own. Partnering with her sister, J. Glen, they began a journey that has exceeded their expectations and proven that through hard work and determination, that dream can be a reality.

J. Glen is a North Carolina native currently residing in a small mountainous town. She attended an East Coast university and obtained a degree in Communication and Journalism. With an interest in writing at a young age, Glen had one idea of the perfect career and now, along with the help of her sister, she’s embarking on a journey to achieve just that.

0 responses to “In Review: Unexpected by Dulaney-Glen”