With her signature heart and humor, Julie Halpern explores a strained friendship strengthened by one girl’s battle with cancer.

Alex’s father recently died in a car accident. And on the night of his funeral, her best friend Becca slept with Alex’s boyfriend. So things aren’t great. Alex steps away from her friendship with Becca and focuses on her family.

But when Alex finally decides to forgive Becca, she finds out something that will change her world again--Becca has cancer.

So what do you do when your best friend has cancer? You help her shave her head. And then you take her bucket list and try to fulfill it on her behalf. Because if that’s all you can do to help your ailing friend--you do it.

The F– It List is the first of Julie Halpern’s books that I’ve read. I typically shy away from books about kids with cancer, or anyone with cancer really, because I’m an emotional reader and the topic of cancer really gets to me. But the premise for this book sounded interesting and unique and I couldn’t pass it by. After reading The Fault in Our Stars, I realized it was entirely possible to write a book about sick kids that, while heartbreaking, is still hopeful. I thought this one might be similar. It had an entirely different vibe, but I appreciated this one just as much.

The characters made this book utterly unputdownable for me. I devoured it in one sitting. Each of the primary characters – Alex, Becca, Leo and Caleb – had depth. They were relatable. I cared about each and every one of them. They complemented each other perfectly. While they each fit somewhat fit into a stereotype on the surface – damaged girl, bad boy, drama girl, homeschooled boy – they’re much more than that underneath. The pairings in the book were spot-on. Leo and Caleb were both absolutely swoon-worthy in their own way.

“After my dad was killed, I pretty much gave up all belief in God. People loved to say ‘comforting’ things to me, like, ‘It’s part of God’s plan’ or ‘God only gives you what you can handle.’ Um, fuck you? And fuck God. Seriously, if the god they believed in was giving out dead dads and cancer, I wanted nothing to do with him. And yeah, of course I can handle what was doled out to me. Because I was forced to. What were my options? Not handling it? Even that would be a nice choice, and therefore, the way I handled the situation. It’s pretty damn hard to believe in God when you’ve lost so much.”

Alex had been through a bunch of really terrible things over the last several months. Her father was killed in an accident. Her best friend had slept with the guy she was dating. After a couple months of reflecting on everything, she’s ready to move on and make amends when she learns her best friend has cancer. While Alex might not have been the most mature character through parts of the book, I admire the maturity with which she handled the situation with Becca. They talked through things and got their friendship back on track nearly immediately. She was back to being the supportive friend Becca needed during her illness. She jumped right in with both feet to help make things easier on Becca, starting with shaving Becca’s head and helping her cross things off the bucket list she started when she was nine years old.

I was glad to see Alex put aside her issues with Becca’s “betrayal” early in the book. I would have hated to see that drag on any longer than it did. Their friendship was special and I thoroughly appreciated it. It reminded me a lot (minus the cancer, thankfully) of me and my closest friends in high school. Their dialogue, whether funny, dirty or more emotional, was perfect to me. It was realistic. Sure, there was lots of profanity and talk of sex, but high school  girls talk like that. Or at least my friends and I did at that age. I thought this was a much more accurate portrayal of high school girls than a lot of the slightly-prudish, innocent and virginal characters in a lot of YA books. But it’s been awhile since I’ve been in high school…

In the midst of dealing with her dad’s death and Becca’s cancer, Alex isn’t ready to begin a relationship. She feels she should be focusing on Becca and her needs. Enter the mysterious Leo Dietz. She has been intrigued with him for quite awhile. They begin to spend time together and she really likes him, though she’s not willing to admit it to herself or to him yet. She wrestles with her feelings for Leo and the guilt of living her life as Becca is going through so much. Leo wants to move forward and she’s resistant. Even with their mutual feelings and chemistry, it causes some pretty tough times for them.

“He totally wants to bone the cancer right out of you,” I told Becca.

I loved Becca’s attitude. I respect the hell out of someone who is faced with a battle like cancer and refuses to let it get them down or break their spirit. She was strong and tough. She made me laugh. I loved her flirtation with the homeschooled boy next door. I won’t call it innocent, because it definitely wasn’t that, but it was cute. Their communications made me smile. I hoped that she would kick cancer’s ass and be able to explore a real relationship with him.

“I needed that kiss. Every part of me needed it. Not just my body, which screamed at me to touch him ever since I landed on his bed again, but my mind, my heart, my soul. I needed him to show me he forgave me wholly for leaving him, so that I could finally show Leo how much I truly felt for him.”

This book was about a lot more than a girl with cancer. It was about dealing with tragedy and illness. It was about true friendship and the lengths you will go to for a friend. It was about family. Love. Learning how to move on and allow yourself to live. Growing and maturing. Giving in to what you want. In the end, Becca’s “F– It List” helped Alex truly live again as much as it helped her. This book had heart and humor and I would highly recommend it to anyone would enjoys reading mature contemporary YA novels. 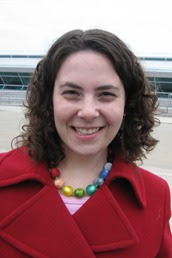 Julie Halpern is the author of Get Well Soon, Into the Wild Nerd Yonder and Don't Stop Now, as well as the picture book Toby and the Snowflakes. In addition to writing, Julie is a middle-school librarian. She graduated from the University of Wisconsin in Madison, lived in Australia for six months, and created a couple of zines before she started writing books, and realized she was and always has been a writer. She is married to the artist Matthew Cordell, and they live outside Chicago with their daughter and gloriously large Siamese cat, Tobin.