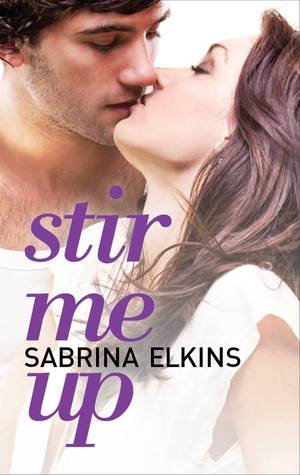 Stir Me Up by Sabrina Elkins
Genres: Contemporary, Romance, Young Adult
Publication date: October 1, 2013
Publisher: Harlequin Teen
Format: eARC, 268 pages
How I got it: From the publisher
Add it: Goodreads
Buy it: Amazon | Barnes & Noble
My rating:

Cami Broussard has her future all figured out. She'll finish her senior year of high school, then go to work full-time as an apprentice chef in her father's French restaurant, alongside her boyfriend, Luke. But then twenty-year-old ex-Marine Julian Wyatt comes to live with Cami's family while recovering from serious injuries. And suddenly Cami finds herself questioning everything she thought she wanted.

Julian's all attitude, challenges and intense green-brown eyes. But beneath that abrasive exterior is a man who just might be as lost as Cami's starting to feel. And Cami can't stop thinking about him. Talking to him. Wanting to kiss him. He's got her seriously stirred up. Her senior year has just gotten a lot more complicated...

Stir Me Up is the story of Camille Broussard and her family. Cami’s dad is a famous French chef. She works, more hours than she probably should, in his restaurant. She’s working her way slowly up the ranks at the restaurant. She’s earning her dad’s respect as a chef. She might want to do this for the rest of her life. She’s just not sure. Cami is an average teenage girl. She’s confused about her boyfriend, Luke, and her future. I connected with Cami immediately. I found her to be refreshing. She was mature for her age. She was strong and stubborn, but still sweet. Cami lives with her dad and his new wife, Estella. Estella’s nephew, a Marine named Julian, is seriously injured in by an IED overseas. Cami’s dad insists she go with Estella to the military hospital in Bethesda, Maryland. Estella needs the moral support and he can’t be with her because of the restaurant. Cami has never met Julian, but agrees to go with Estella to help in whatever way she can. She has no idea what she’s getting herself into.

“I survived Afghanistan,” he says. “Survived my truck being blow up and my leg being blown off. But Camille Broussard? No. No no.”

Julian is the only survivor of the explosions. He lost three friends that day. Julian’s broken – mentally and physically. He’s missing half of one leg. He’s undergone a number of surgeries. But, he’s lucky to be alive. He’s incredibly bitter and doesn’t want anyone around him. He’s especially sensitive to Cami’s presence. It’s obvious he’s uncomfortable and hurting and embarrassed to be around a total stranger. Julian winds up moving into the house with Cami, her father, and Estella. Cami is convinced he’s a jerk, albeit an attractive one, but she still tries to bond with him to make things easier on everyone.

“Part of the PTSD they tell me I have…” His voice trails off as he pulls my hair away from my neck, “includes trouble with feelings. Nothing affects me or seems real. It’s like I’m numb. Except for with you. With you, I feel too much almost.”

“Julian, I need you. Not in ways you can see. But in ways that I feel. If I’m your life raft, we’re in trouble – because you’re mine.”

It doesn’t take long before Cami and Julian are fighting a mutual attraction. He’s older, more experienced, dealing with a number of problems as a result of his time overseas. Cami is young and doesn’t know exactly what she wants out of life. But she does know she wants Julian. I loved watching these two come together and try to stay together through all the changes coming for them. They’re so sweet together. I loved each of them separately, so I was absolutely enamored with them as a couple.

“What happened to your freckles?”
“They’re hiding under the makeup.”
“Will they suffocate?”

Stir Me Up was a sweet, charming, delightful book. The characters were likable and easy to connect with. The storyline was realistic and the dialogue was great. I only wish this book was a little longer. I would love to see a sequel to this one. If you’re looking for a feel-good YA contemporary romance that will leave you with a warm fuzzy feeling and a smile on your face, this one is for you.

SABRINA ELKINS, author of Stir Me Up and Make it Real (Harlequin TEEN), has also worked as a journalist, movie copywriter and prep cook. She grew up in Vermont, graduated from USC, and now lives in Southern California with her husband and three kids.

Tags: 4 Star Review, In Review, Sabrina Elkins, Stir Me Up