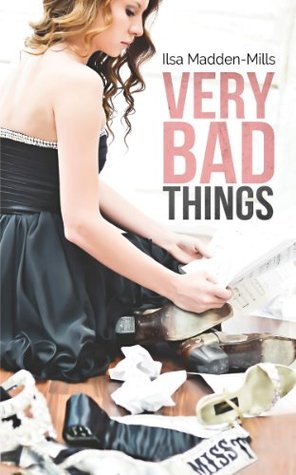 Publication date: September 10, 2013
Publisher: Self-Published
Format: eBook, 325 pages
How I got it: I bought it!
Add it: Goodreads
Buy it: Amazon | Barnes & Noble
My rating:

Born into a life of privilege and secrets, Nora Blakely has everything any nineteen-year-old girl could desire. She’s an accomplished pianist, a Texas beauty queen, and on her way to Princeton after high school. She’s perfect…

Leaving behind her million-dollar mansion and Jimmy Choos, she becomes a girl hell-bent on pushing the limits with alcohol, drugs, and meaningless sex.

Then she meets her soulmate. But he doesn’t want her.

When it comes to girls, twenty-five-year-old Leo Tate has one rule: never fall in love. His gym and his brother are all he cares about...until he meets Nora. He resists the pull of their attraction, hung up on their six year age difference.

As they struggle to stay away from each other, secrets will be revealed, tempers will flare, and hearts will be broken.

Very Bad Things was one of my most highly-anticipated books of the summer. Upon first reading the description, I was sucked in by the good girl gone bad idea. Add in some unrequited love and I am oh-so-very there. It lived up to my every expectation… and then some.

“Fuck Briarcrest Academy, and fuck you all.”

This book sucked me in from the first chapter when Nora, the incredibly smart and talented girl who appears to have it all, snaps at Briarcrest Academy’s Open House. Nora’s reached her breaking point. It’s time for her to live a life other than the one her parents have been forcing her to live and I was thrilled to be along for the ride, bumps and all.

On the outside, Nora Blakely seems like the perfect girl, perfect student. She’s a National Spelling Bee winner, editor of the yearbook, co-captain of the debate team, and an all-around exemplary role model. She’s a beauty queen. She plays the piano. She loves words and “collects” them. She’s also broken. She’s hiding a huge secret and has finally reached her breaking point. She doesn’t want to be this perfect girl anymore, so she comes up with a very different sort of to-do list. Nora’s ready to be bad.

“I’m not waiting for the right girl because she doesn’t exist.”

Enter Leo Tate. He’s in the audience with his younger brother, Sebastian, when Nora has her big moment. On the outside, Leo is the stereotypical bad boy. He owns a gym. He’s a musician. He’s scorching hot. He definitely doesn’t do relationships. He’s certainly not looking for a relationship with a damaged girl seven years younger than him. He’s attracted to Nora, but isn’t interested in pursuing more.

“He glared at me, his entire body frozen up, like a tiger poised to pounce. Like he was going to jump on me and devour me. I wondered if he’d eat me the way I wanted.”

Everything begins to change the night that Nora vandalizes Leo’s Escalade. Sebastian convinces Leo to take her into their home so she can clean up – and sober up. Convinced it’s time to tackle her list of bad things, Nora strips for Leo, teasing him. He’s tempted, but even after learning that she is not jailbait as he feared, he still turns her down. He sleeps with women, not spoiled, rich girls. He won’t let her leave that night because she’s drunk and needs to sleep it off and he winds up comforting her after she has a nightmare. Nothing physical happens, but they begin to bond. She opens up to him about her past and he realizes there’s a lot more to her than meets the eye.

“Seeing her walk toward me was like hearing the sweetest fucking rock ballad ever, playing loud and clear in my head. You know the ones, songs about love and how you never believed it existed, until you met her; songs about how you’ve been alone for what seems like forever, but she’s gonna make it alright; songs about how you can’t breathe without her. Yeah. It was like that.”

“Nora, I know you’re hiding secrets, and I’ll do whatever it takes to get you back from that. No matter what, you’re a good girl with all these great talents, and someday you’ll have a big future. Just not with me. I’d just drag you down. I’d end up hurting you.”

The Tate brothers begin to be everything Nora needs. She forges a close friendship with Sebastian. They become so close that, despite his best intentions, Leo begins to feel jealous of his brother. He’s not sure that something isn’t going on between Sebastian and Nora. He loves his brother, but his attraction to Nora is strong and distracting. Nora and Leo become close in a much different, more volatile way. They want each other, that much is obvious. Their chemistry is seriously intense. It’s as though the air is ready to ignite when they’re in the same room. Leo tries like hell to fight it. He just wants Nora to find herself. He wants good things for her. He doesn’t want her to be the girl with the list of bad things to do. He knows that’s not the real Nora.

“Leo, when your eyes found mine that day, I got lost, and I didn’t want to look away. It was like the whole world vanished except for me and you. We connected somehow. It was an extraordinary moment, and it builds and builds every time we see each other. Have you ever thought that maybe… maybe we were meant to be together, Leo?”

“It’s hard to give up something when it’s everything you want.”

As you can imagine, this book is filled to the brim with angst. But it’s the best possible type of angst. The sexual tension between Nora and Leo is thick. It’s hot and just waiting to explode. There are some straight up five-alarm scenes in this book. The “lesson in clarity” scene is so damn hot that I was convinced my iPad was going to melt! ::fans self::

“Sometimes you just need a badass theme song to get you through the day. All the superheroes have them. Even the Power Rangers have a hardcore guitar anthem. So, I may not be Wonder Woman with her invisible plane, but I have been called brilliant before. In fact, I have a collection of theme songs for different days, depending on what was going on in my life, and tonight my theme song was “Perfect” by Pink. I blasted it in my car, listening to her sing about a girl who’d been mistreated and misunderstood.”

“And then it happened. Something big shifted inside me… inside my heart. Fuck. Me.”

The characters were so complex and well-written. I couldn’t walk away from them. I HAD to know what happened. I wanted to know what all the secrets were and if true feelings would ever come to light. Despite her faults and issues, Nora was completely likable. She had a bit of quirkiness to her. To a casual observer, she might have appeared to have an easy life, but the truth is it was anything but. Though Leo made me want to yell and scream at him, I absolutely loved him. He was the perfect alpha male, “bad boy” lead. I loved that the book was written from both of their perspectives so I was able to get in both of their heads. I loved the dynamic between Leo and Sebastian. Leo may not have been perfect, but he was a damn good brother and guy, in general. He was protective of those he cared about and though he might not have always gone about things in the best way, he (most) always had the best of intentions. What can be said about Sebastian? He was a sweet kid. I hope we get a book from his perspective in the future.

“Even after all that has happened to me, I’ve never given up wishing on stars.”

“It isn’t just angels who have wings. All kinds of beautiful creatures have them. And someday you’re going to fly away from here and leave all this shit behind. You need your own wings.”

There’s more to this book than meets the eye though. It touches on some pretty deep issues. I laughed, I cried, I smiled, I wanted to throw my iPad across the room. The story flowed well and was unique. I read a lot of NA lit and I haven’t read anything quite like this one before. I really love this author’s style and I look forward to more fantastic books from her in the future. She’s going on my auto-buy author list. 🙂

She spends her days with two small kids, one neurotic cat, and one husband. She collects magnets and rarely cooks except to bake her own pretzels.

When she’s not crafting a story, you can find her drinking too much Diet Coke, jamming out to Pink, or checking on her carefully maintained chocolate stash.

She loves to hear from readers and fellow authors.

One response to “In Review: Very Bad Things (Briarcrest Academy #1) by Ilsa Madden-Mills”