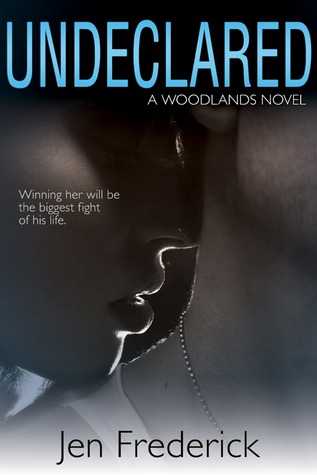 For four years, Grace Sullivan wrote to a Marine she never met, and fell in love. But when his deployment ended, so did the letters. Ever since that day, Grace has been coasting, academically and emotionally. The one thing she’s decided? No way is Noah Jackson — or any man — ever going to break her heart again.

Noah has always known exactly what he wants out of life. Success. Stability. Control. That’s why he joined the Marines and that’s why he’s fighting his way — literally — through college. Now that he’s got the rest of his life on track, he has one last conquest: Grace Sullivan. But since he was the one who stopped writing, he knows that winning her back will be his biggest battle yet.

I hadn’t heard of this series until I picked up a review copy of the second novel, Unspoken, from NetGalley. I don’t like to start a series, even if they are standalones set in the same world, in the middle, so I bought this novel. Holy. Wow. I’m glad I did. I’ve always had a thing for men in uniform, both in real life and in books. Noah Jackson was absolutely no exception. My word. Even his name is hot. But, he’s way more than just a hot Marine/fighter. I can’t pigeon-hole him like that.

“Lana harped on the unhealthy attachment I had in high school to a Marine with whom I had corresponded for four years. ‘Self-fulfilling’ and ‘self-destructive’ behavior were among the many therapy-speak phrases that Lana enjoyed whipping out.”

This novel begins with the first letters written between a high school student and a Marine on active duty overseas. What began as part of an English composition class project grew into so, so much more. The letters pop up throughout the book and I loved reading about how Grace and Noah’s friendship evolved through the letters. Their banter was cute and charming. I connected immediately with both characters through their letters. I loved that they were used as a transitional piece between chapters, too.

“The Marines may have made me a man, but Grace made me human. No matter what I told her in my letters, she accepted it and wrote me back something funny or sweet. She made me realize I could have more if I wanted it. And I wanted more bad.”

Grace and Noah are reunited at college. He and his best friend, Bo, a fellow Marine and MMA fighter, have transferred from junior college in California to her school. Noah’s on a mission to win Grace back. Their attachment to each other had grown during the course of their letters. They were all set to begin a true relationship when he was finished with active duty. But, Noah was a mess. He needed some time before going to Grace, and instead of telling her that, he wrote her a letter and friend-zoned her. He regrets it every day and will do whatever it takes to win her trust and affection back.

“It would be so easy to drop my defenses and tumble into his arms, but what would happen when he let go? I didn’t think I’d recover from the fall.”

Grace is conflicted. She still has all the feelings for Noah, including the anger and resentment. She isn’t ready to forgive him yet, though, but agrees to try to rebuild the friendship. As they spend more and more time together, the attraction and feelings start to reach the boiling point.

“The person I want to kiss isn’t really feeling me right now,” he half-joked. His eyes were warm, and I knew I was courting danger here. The old Noah wound healed up over the last year, and now I was threatening to slash it open and pour salt all over it.

Noah was a genuinely good guy. He made some mistakes, the biggest one letting Grace think he didn’t care, but he’s trying to redeem himself. He was so obviously interested in her. He cared for her. He didn’t run and hook up with someone else when times got hard. That’s one of my biggest complaints about a number of the books I read. Boy likes girl, girl plays hard to get, boy screws everything in sight. It’s offensive and unrealistic. Thankfully that’s not an issue here. Noah isn’t interested in a cheap hook-up. He wants Grace.

“Trust me to know my own feelings. Don’t assume you know what’s best for me.”

I liked Grace a lot. I was able to identify with her. She’s insecure, innocent and slightly naive, but not dumbly so. She has a backbone. She’s relatively stubborn. She made Noah work to get back in her good graces. He didn’t just say some pretty words and she fell into bed with him. Real life isn’t that easy and book plots shouldn’t be either. I was able to relate to her as a photographer, too. That was an added bonus for me.

“I felt like he was a marauder, invading my mouth and my senses.”

I loved Grace and Noah together. They made for a wonderfully believable couple. Their attraction and chemistry was through the roof. I cheered for them throughout the entire novel. While there were some pretty steamy scenes, their relationship didn’t revolve around sex. They were friends first, albeit in an untraditional way, and their relationship grew from there. That’s how you know it was real.

I thoroughly enjoyed this book. From the main characters to the secondary ones – especially Bo and Lana – to the dialogue and the storyline, it was a winner. I’m absolutely impressed with Jen Frederick’s work and look forward to reading many other fantastic books from her in the future. Works like this make me glad I take chances on indie authors. People who aren’t willing to just don’t know what they’re missing.

7 responses to “In Review: Undeclared (Woodlands #1) by Jen Frederick”