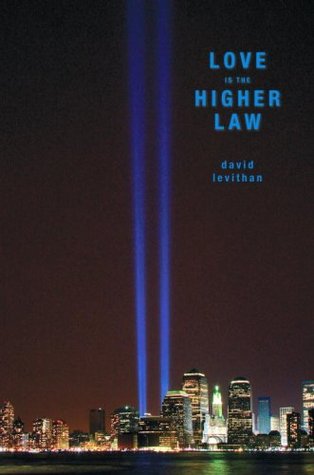 Love is the Higher Law by David Levithan
Genres: Contemporary, Young Adult
Publication date: August 25, 2009
Publisher: Knopf Books for Young Readers
Format: eBook, 176 pages
How I got it: I bought it!
Add it: Goodreads
Buy it: Amazon
My rating:

The lives of three teens—Claire, Jasper, and Peter—are altered forever on September 11, 2001. Claire, a high school junior, has to get to her younger brother in his classroom. Jasper, a college sophomore from Brooklyn, wakes to his parents’ frantic calls from Korea, wondering if he’s okay. Peter, a classmate of Claire’s, has to make his way back to school as everything happens around him.

Here are three teens whose intertwining lives are reshaped by this catastrophic event. As each gets to know the other, their moments become wound around each other’s in a way that leads to new understandings, new friendships, and new levels of awareness for the world around them and the people close by.

David Levithan has written a novel of loss and grief, but also one of hope and redemption as his characters slowly learn to move forward in their lives, despite being changed forever.

I struggled for a long time to decide what I would do on my blog to honor 9/11. It just didn’t seem right not to do something. After a lot of thought, I decided the best thing I could do would be to share with you my review on a book that’s a few years old, a book I actually read for the first time last year, on the anniversary of 9/11. I don’t know what finally made me decide to read this book, especially on that day, but I’m glad I did. It was beautiful.

I’ve never been through something that impacted my life so thoroughly, yet not at all, as I was on that day and in the days following. I was too young to remember the first attempt to bring down the towers in 1993 or the Oklahoma City Bombing in 1995. Actually, maybe it’s not a question of being too young, I was 14 and 16, respectively, but I was safe, living at home with my parents. I was protected. I knew those events were horrific and sad, but I didn’t fully understand the weight of them. I grew up in a small town. I went to college in a small town. I spent my entire life in small towns – up until the end of August 2001. It was then that I packed up and moved to the Washington DC suburbs. I wanted excitement. I wanted to live where the action was. I didn’t have any idea what was going to happen just a couple short weeks after I moved.

“I know immediately that this is going to be one of the true historic moments of my life – that the personal and the historic are converging. I know people will ask, ‘Where were you when you first heard?'”

Without getting into all of the details, I’ll say that I was home alone on 9/11. My roommates were all at work. I was to be going to work in the afternoon. Our apartment was about 10 miles from the Pentagon. I was scared out of my mind. I was in a new city, truly living on my own for the first time in my life, 4 hours away from my parents and the country was seemingly under attack. I will never, ever forget the way I felt that day.

“Seeing it erases any premonitions I might have had, because even if I felt something was wrong, I never would have pictured this. This isn’t even something I’ve feared, because I never knew it was a possibility.”

Love is the Higher Law follows the lives of three teenagers in New York during the events of September 11, 2001 through the first anniversary of the attacks in 2002 and the start of the war in March 2003. I was originally uncomfortable at the thought of them potentially being in danger, or of losing a loved one. Rest assured, the book does not take that path. It’s more about the thoughts, feelings and struggles these teens have as a result of what happened that day. While the book talks about where each of these characters were when they found out, I never once felt as though it was glorifying the tragedy of the day.

“I cannot think of a single word to describe what we feel. I think we all feel it, to varying degrees. Perhaps in some other language there is a word for ‘the world is terribly wrong.’ That feeling of stun and unbelief and abandonment and shock and horror and distress.”

The characters drive this story far more than the tragedy does. They were well-developed, believable and relatable. It was easy to empathize with them. They were portrayed so realistically. I have no doubt nearly every teenager in New York City was having similar thoughts and reactions as the events unfolded that day and the city and country began to try to heal after. I don’t need to tell you the plot of this story. We all know what happened that day. It’s the stories of these three teens, and learning how their lives come to interconnect, that makes this book special.

“I think that if you were somehow able to measure the weight of human kindness, it would have weighed more on 9/11 than it ever had. On 9/11, all the hatred and murder could not compare with the weight of love, of bravery, of caring. I have to believe that. I honestly believe that. I think we saw the way humanity works on that day, and while some of it was horrifying, so much of it was good.”

“Maybe there’s a way to keep us in this moment. Not the sad part. But the coming together part.”

One of the things I appreciated most about this book were the small details in this story encompass, for me, the best of what came out of the tragedy. The attention to detail was extraordinary. The observations of the teens in the book so closely mimicked the real-life stories I read after that day. From the shopkeepers who handed out food and drinks and even shoes to those escaping from Lower Manhattan, to those folks grieving together and connecting with total strangers during the memorials held after. Amongst the tragedy and darkness, the death and destruction, there were little signs of hope, of coming together, of all that is the best part of mankind.

The moving-on and living chapters of the book were very powerful to me. The understanding that while things have changed and times are different, you can’t stop living your life. You ride the subway. You fly on airplanes. You go to concerts and other places where there are large crowds of people. New friends are made, new relationships are had. While these characters realized this event had impacted their lives in a very powerful way, they moved forward. Never forgetting, but not letting fear run their lives.

If I’m being honest with myself, when I first read the blurb for this book, I had no desire to ever read it. The events of 9/11 are not something I want to read about. They were horrifying and have no need to be dramatized. They don’t need to be a cheap plot line (looking at you, Remember Me). But, I’m really glad that I set aside my doubts and made an exception for this book. It was raw and real. It respected the events. It was a story of grief, yes, but it was also a story of hope. It’s a short, yet powerful, book. It was like a love song to the city. I don’t know that any other author could have made this work as well as David Levithan did.

“This is what a memorial is: standing still, staring at something that isn’t there.”

David Levithan (born 1972) is an American children's book editor and award-winning author. He published his first YA book, Boy Meets Boy, in 2003. Levithan is also the founding editor of PUSH, a Young Adult imprint of Scholastic Press.