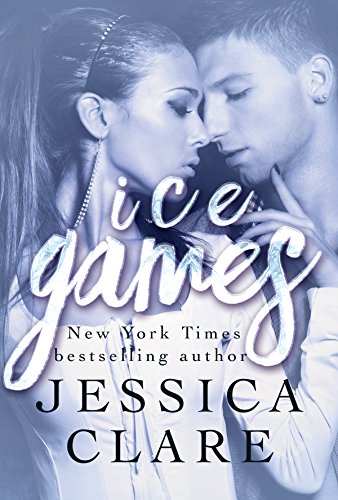 Zara Pritchard is a has-been. Once an Olympic darling, she's been reduced to skating in a dinosaur costume and giving lessons at the local mall...which is why she's excited when she's offered a chance to sub on a TV show, Ice Dancing with the Stars. If she wins the show, this could be the break she needs.

There's just one problem - her partner.

But when wash-out meets flame-out, sparks fly and tempers flare. And Ty and Zara start to realize that maybe this partnership might be just as steamy off the ice as on it…

Jessica Clare’s reality TV-inspired romance series is back with Ice Games. I love watching ice skating and the idea of a reality show about ice skating is something I would watch in a heartbeat. Oh, wait, FOX did one of those a few years ago, right? Skating With Celebrities. It didn’t last long and wasn’t renewed for a second season. But my roommates and I still enjoyed watching it. For those who didn’t watch it, imagine Dancing With the Stars with the added challenge of being on ice. It was a delightful trainwreck.

“No one had to know that Zara Pritchard had fallen so far. No one but me. This was my chance to redeem myself, anyhow.”

Zara Pritchard was on top of the world as a teenager. She won Nationals at thirteen. At fourteen, she was competing in the Olympics in Salt Lake City. She was a prodigy. She was cocky. She fell during the competition and committed one of the biggest faux pas in ice skating – she walked off the ice mid-routine. When the crowd began to boo, she flipped them off. Her behavior horrified her coaches and family, embarrassed her team, and killed her career. Now she tutors children at the local mall’s ice skating rink, takes the occasional odd job as a costumed mascot, or gives private lessons. It was a long, hard fall. Then fate intervenes with a second chance. The reality show Ice Dancing With the Stars is in need of a female skater to fill in for a pregnant series regular. Zara is humbled by her experiences over the last few years and is determined to make the best out of this opportunity.

“Fucking stupid-ass move. You ever have one of those moments in your life where you can’t believe you did something so stupid? And how you pretty much fucked up everything and threw it all away in one hotheaded moment?”

If anyone understands how easily one mistake can ruin a career, it’s Ty Randall, the MMA Biter, er fighter. During a fight in Vegas, Ty bit his opponent. On the nose. Now, MMA fighters aren’t really known for clean fights, but there’s a big difference between fighting dirty and biting a chunk out of your opponent’s nose. Ty was forced onto the show by his publicists in an effort to clean up his reputation. To say he was an unwilling participant would be a huge understatement. He had no intention of trying to truly compete and win the show. There was more to Ty than met the eye and I enjoyed seeing his sweet and gentle side come out as time wore on.

“I knew that feeling. The moment that you realized you were a complete and total fuck up. That you’d gotten so arrogant and so complacent about who you were that let you let it all go to shit because your pride got in the way. And no matter how much you regretted it – an hour later, a week later, a month later – you couldn’t take it back. Ty and I were more alike than I’d thought.”

Zara and Ty are partnered up for the show. It’s hard to say who is less thrilled about this pairing. Zara was expecting this opportunity to give her the second chance in her career she so desperately wants. But she needs to have a partner who is serious about competing to do that. Ty thinks Zara is mouthy and uptight. After a strange mishap in which Zara ends up with a bloody nose, a petrified Ty agrees to get serious and actually *try* to win in exchange for Zara’s silence. Not that he did anything bad to her, but it would have looked bad given his history.

He gave one of my locks a tug, and then rubbed it between his fingers. “If I saw this hair at five in the morning, it’d be because it was spread all over my pillow.”

As practices continue, their partnership solidifies and they begin learning more about each other. They aren’t so different. With understanding comes friendship and flirtation. Their chemistry was intense and it was only a matter of time before they were unable to keep their hands off each other. But, for the good of the competition, their partnership, and their careers, they agree to keep things friendly… for now.

“Make you feel better?” He looked at me like I was crazy. “There are a lot of reasons I’d have a boner, but Pity-Boner is not on the list.”

It’s hard to say whether I liked Zara or Ty better. What I can say is that I thoroughly enjoyed navigating the world of ice skating and competitive reality TV with them. Whether it was their back and forth and flirting or the outside drama with the other contestants and the judges, I ate it up. Their dialogue and chemistry was fun and sexy. They very nearly managed to edge out Abby and Dean from Wicked Games as my favorite couple in Jessica Clare’s Games series.

Another fantastic “guilty pleasure” book. I could get used to these. I can’t wait for Bedroom Games, the fourth book in this series of standalone novels. Unfortunately, I have no choice. It won’t be released until 2014. The good news is, that gives those of you who haven’t yet read the books time to catch up.