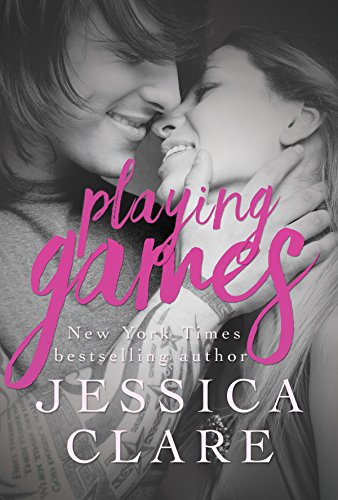 Katy Short doesn't want to be on The World Races. She’s not a social butterfly like her brother (and partner) Brodie. In fact, she’s just as happy to end up in last place as in first.

But when her brother makes a selfish move that pairs her up with silent and surly rock star Liam Brogan, everything in the race changes. Now Katy’s fighting to stay out of the Loser Lodge, just so she won’t have to suffer through all that alone time with Mr. Tall, Dark and Arrogant.

Except Liam? Kinda hot. He’s sexy, pierced… and not nearly as surly as she thought. There’s one good thing about a game with partners -- lots of one-on-one time…

This is book two of the Games novels, sexy contemporaries with a reality TV twist.

Warning: do not read this review if you haven’t read Wicked Games, the first book in this series.

So, confession time. I totally read these books out of order. I knew they were part of a trilogy. I received an ARC of Ice Games through Goodreads and decided I needed to pick up the first two books before I read and reviewed that one. I bought the books. Then I read the second one before the first. Sigh. Yeah, yeah, they’re standalones, but the characters from the first book reappear in the second. Needless to say, I kind of took any surprise out of the first book by knowing Dean and Abby were a couple. But, I digress.

“Maybe she’s cranky because her brother abandoned her to hook up with a hot girl.” The voice was deep and smooth and held just a hint of reproach. “I imagine that anyone would be in a bad mood if that happened to them. She got sold out by her partner.”

Katy Short’s brother Brodie has dreams of being on reality TV. He convinces her to audition for him for a spot on Endurance Island. The producers don’t select him for that show, but they love the idea of teaming Katy and Brodie up for The World Races (cough, The Amazing Race, cough). She’s not sold on the idea, but Brodie convinces her to do it. The prize money is tempting. It could really help her to continue growing her bakery. Katy agrees to join him on the show and makes an unexpected game move that splits their team and gives them both new partners. Brodie is an ass.

All that said, Katy definitely got the better end of the split. Instead of being paired with her self-centered brother, she’s teamed with sexy, pierced, tattooed rock star Liam Brogan, who was forced into the show by his label. Katy thinks Liam is a stereotypical conceited jerk rock star. She couldn’t be more wrong.  He doesn’t fit the rock star stereotype. He’s sweet and thoughtful. Liam is a good guy. While neither of them were on the show because they wanted to be, they decided to make the best of it, “make good TV,” and see how long they could stay in the game. Along the way, their attraction for each other grew and eventually they gave in to their desires.

“Was apadravya a foreign word for drive you fucking mad with pleasure?”

The chemistry between Katy and Liam was totally believable. Their dialogue was realistic and funny. The love scenes were scorching hot. As they continued on in the game, lust turned to something more and the “is this real or just for show” insecurities set in for both of them.

I really liked Katy and Liam. I had to root for them to get together, and hopefully win the game while they were at it. I’m always a sucker for a “showmance” in my reality TV watching. I liked Abby and Dean a lot. I loved to hate Brodie and Tesla. I loved following the drama and the awful challenges. Honestly, I just really enjoyed pretty much everything about this book.

I picked this novel up originally because I wanted to read the first two before reviewing the ARC of Ice Games and I really didn’t know what to expect. I had never read a book by this author before. I was more than pleasantly surprised by every book in this series. I’m anxiously awaiting the release of the fourth novel, Bedroom Games, in 2014. If you like sexy, sweet New Adult romances and reality shows, do yourself a favor and give this series a chance.