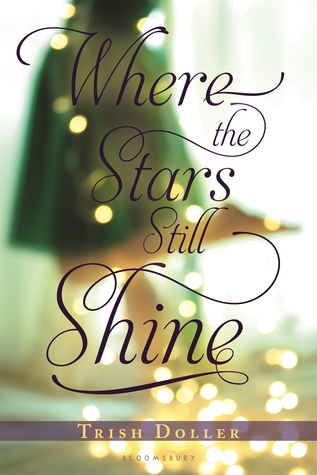 Stolen as a child from her large and loving family, and on the run with her mom for more than ten years, Callie has only the barest idea of what normal life might be like. She's never had a home, never gone to school, and has gotten most of her meals from laundromat vending machines. Her dreams are haunted by memories she’d like to forget completely. But when Callie’s mom is finally arrested for kidnapping her, and Callie’s real dad whisks her back to what would have been her life, in a small town in Florida, Callie must find a way to leave the past behind. She must learn to be part of a family. And she must believe that love--even with someone who seems an improbable choice--is more than just a possibility.

Trish Doller writes incredibly real teens, and this searing story of love, betrayal, and how not to lose your mind will resonate with readers who want their stories gritty and utterly true.

“I want traditions. Eggnog. Peace on earth, goodwill toward man. I want to kiss Alex Kosta under the mistletoe. I want memories untarnished by ugliness. I want all of that without feeling guilty about wanting it.”

After years growing without a real home, living in seedy apartments with seedier men, and moving from place-to-place after her mom kidnapped her, Callie is reunited with her large, close-knit Greek family in a small town in Florida. She starts rebuilding broken relationships and forging new ones. She starts to want things that are actually in reach. Real, tangible things like love, acceptance, friendship, and family.

I started the book filled with empathy for the life Callie was living. I connected with her immediately and became her cheerleader. I could see how broken she was. I wanted her to be put back together. I was so relieved when she went back home with her father. I was pleased to see how well she was accepted into his, their, new family. They made a place for her. She finally had a home. It was obviously tough for her. Tough to realize that she was putting her life back together while her mother’s life was falling apart. But, we’ll get to that later. I wanted to cry when she was throwing herself at guys, continuing an old pattern of thinking she was only wanted for one thing. Callie grew up beautifully in this book.

“He glances up, and his face is something so fine and beautiful, it makes my chest ache the way it does when I hear a sad song or finish a favorite book.”

“Listen, I work with him, so I’ve see the way he operates. Alex Kosta can be described in two words: man whore. Or maybe that’s one word. Hyphenated?” She shrugs. “Either way, just… no.”

We’re introduced to Alex (Alexandros) Kosta almost immediately upon Callie’s return to Florida. I wasn’t so sure about Alex when he first came into the picture. The last thing Callie needed was another man to use her or treat her like trash. I was afraid Alex would do just that. I could not have been more wrong. Alex Kosta is beautiful, inside and out. He’s also greatly misunderstood. People see what is on the outside and make assumptions and don’t take the time to get to know the guy underneath. He’s deep. He’s dealing with his mom’s illness and just wants to get away. He and Callie connect immediately. Their chemistry is palpable. Contrary to what others believe, they are just what the other needs.

“Let’s go to the mall and you can do your blank-canvas… thing.”
“It’s not a thing, I want to help you. I want to be your friend.”
“Why? So you can tell everyone you know the kidnapped freak?”
“Callie! This is you and me when we were four. When we were best friends. Of course, I don’t remember it very well, and when you’re four, even the next-door neighbor’s dog is your best friend. But I’ve spent all these years imagining what our friendship would have been like if your mom hadn’t taken you. In my head we had sleepovers and took gymnastics lessons and had first dates with twin brothers, which is hilarious because I don’t even know any twins. And when you came home, I hoped—”
“God, I suck.”

I adored Callie’s cousin, Kat (Ekaterina). It was apparent from the beginning how excited Kat was to have Callie back in her life. Kat wanted to help her fit in. She wanted to protect her. She was convinced Alex was a “man whore” and totally wrong for Callie. Of course, she was also nursing a crush on and rejection from Alex herself, so I think that played into her feelings a lot. She and Callie were able to move past the issues there and grow even closer, get back to being the best friends they were when they were four. Kat was sweet and sassy and opinionated. We would totally be friends in real life.

With so many likable characters, there had to be one that was 100% unlikable, right? In this book, that character is Callie’s mom. To say she is selfish just might be the understatement of the century. I mean, duh, she kidnapped Callie when she was 5, took her away from a family who loved her, and was a terrible mother. She put Callie in horrendous situations when she was young. Situations that led Callie to be damaged as she is today. She wasn’t a parent. She was too busy hooking up with men and abusing alcohol and drugs. We find out there is a deep-rooted psychological issue there as the book goes on, but I still had no sympathy for her. She could have controlled the issues she was having, but she chose herself over her daughter. That’s just plain despicable to me.

I could go on about the characters forever. Trish Dollar writes wonderfully complex and believable characters. Every single character in this book – down to Ariel, the girl who works in the bookstore in town – is well-developed. I wanted to know more about each and every one of them. I wanted to be friends with them. The detail Trish uses makes these characters come alive. They reach out and pull you into the book.

Trish is also a brilliant storyteller. This book has so many different layers: family, love, friendship, hope, betrayal. It’s about Callie’s journey to becoming the person she’s now free to be. It’s about her relationship with Alex, her friendship with Kat, her building a family again with Greg and Phoebe and the boys and the rest of her big, crazy Greek family. I loved the big, crazy Greek family. I loved the names and the traditions. I’m not very familiar with the Greek culture, so I felt like I was learning right along with Callie. I was embracing her family and their traditions as she was.

After her debut novel, Something Like Normal, Trish Doller went on my auto-buy author list. I was beyond thrilled when I received the email saying my NetGalley request for this book was approved. There may have been a happy dance involved. By may have, I mean was. There totally was. As far as I know, this book is a standalone, but I could do with a sequel to this one. I loved these characters so much. It hurt to give them up.

I have been writing for as long as I can remember, but didn't try to be a published author until more recently, something for which you should be thankful.

I was born in Germany, grew up in Ohio, and graduated with a degree in journalism from Ohio State University. Married someone really awesome and moved around with him a bit from Maine to Michigan and back to Ohio. I've worked as a radio personality and as a staff writer for my hometown newspaper. I also had a couple of kids along the way who have become two of the most interesting adults I've ever met.

These days I live, work, and sail in Florida with a relentlessly optimistic border collie and a pirate.